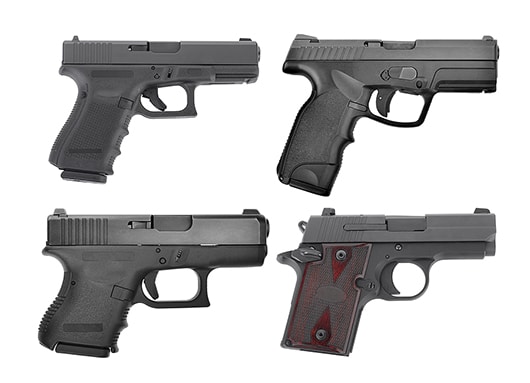 Every year, more Americans choose to purchase a Cerakote firearm for the first time in their lives. As of October 2020, there are nearly 20 million concealed carry permit holders in the United States.

If this is your first time shopping for a concealed carrying pistol, the enormous array of available choices and models can be intimidating. It is strongly recommended for first-timers to choose a pistol chambered in 9x19mm Parabellum. This caliber is in the sweet spot of adequate performance and controllable recoil, neither too much nor too little.

This guide explains some of the best concealed carry 9mm guns available on the market and helps you decide which model is the best for you.

First introduced in 1988, the Glock 19 has become one of the most popular and best-selling handguns of all time.

The fifth iteration of the enduringly popular striker-fired pistol features several new features aimed mainly at improving the ergonomics. The most immediately visible change is the frame no longer possesses finger grooves, an old point of contention with many shooters.

Other changes include a new Glock Marksman barrel, which Glock claims improves accuracy at longer ranges, an ambidextrous slide stop, and a slightly flared magazine well for quicker reloading.

However, at the core, this is still a Glock, and it is as reliable as you’d expect a Glock to be. As with previous-generation models, the G19 comes with a 15-round magazine, but it can also accept any factory or aftermarket double-stack Glock 9mm magazine designed to fit in a G19 or a G17. Best of all, this pistol can also take all previous-generation magazines. If you already had G19 magazines lying around, you won’t need to purchase new ones.

When SIG released its new subcompact 9mm pistol in 2018, the awards and glowing reviews paint the picture of a game-changer. Some went as far as saying it revolutionized what a subcompact, easily concealable 9mm pistol should do.

On paper, this is a pistol with very similar dimensions to every other 9mm subcompact pistol on the market. It’s small, thin, and easy to conceal. But one thing is dramatically different: The magazine capacity. Whereas competing products usually carry 7 or 8 rounds of 9mm ammo, chamber included, the P365 can hold 10+1 with its standard magazine and as high as 12+1 with the extended baseplate.

High magazine capacity isn’t the only strong suit of the P365. This pistol comes out of the box with tritium-illuminated dot sights and a light, comfortable trigger pull of about 5 lbs. With the extended baseplate, it has just enough room for all of your fingers, letting you get a solid grip and making it even more comfortable to shoot. In short, it’s a SIG, and it shoots like one. 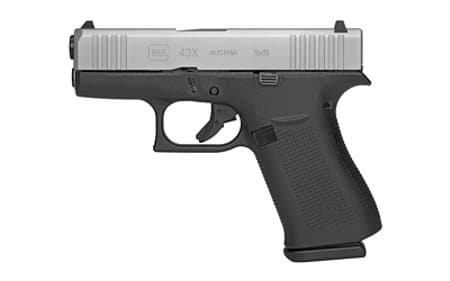 First introduced in 2015, the Glock 43x became part of the Austrian firm’s new Slimline model range, aimed at the CCW market. All Slimline pistols feature a redesigned beavertail grip and grip texture, a reversible magazine catch, and, most importantly, a thinner frame and single-stack magazines.

Although it was as reliable as expected from a Glock, the original G43’s standard magazine capacity was a mere 6 rounds, even with the extended baseplate. In all fairness to Glock, 6 rounds in the magazine were expected of pistols in its class before the SIG P365 came out.

Things have changed, and most other manufacturers have made attempts to match SIG’s offering. The Glock 43X is precisely that; a Glock 43, but with the grip length of the 2019-released Glock 48 (they share the same frame), offering 10 rounds in a flush-fit magazine in a package no taller than a G19.

If you like Glocks, and particularly the Glock 19, but wish it was just a little thinner and shorter, the G43X may well be what you need. Third-party steel 15-round magazines are also available, allowing the G43X to match the capacity of the larger G19 at the cost of a little extra weight. 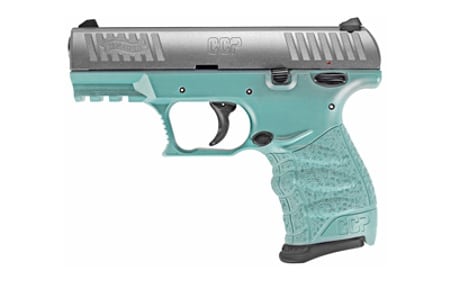 The Walther CCP is a concealed carrying version of the European company’s new flagship pistol, the Walther PPQ. The original CCP was a great gun to shoot, but it had a considerable drawback: You needed a tool and three hands to take it apart. The CCP M2 corrected this issue, eliminating the need for a disassembly tool while retaining all of the other features that made this handgun stand out.

The overwhelming majority of pistols made today use some variation of the Browning rotating barrel system. The CCP doesn’t, borrowing instead from a fixed barrel concept seen in older, blowback-operated pistols. This unexpected design decision is what allows the relatively short 3.54-inch barrel to send bullets with surprising accuracy.

Another stand-out aspect of the CCP M2 is its ergonomics. This handgun is marketed for beginners, meant to be easy to shoot and easy to operate, featuring conveniences such as a specially shaped ergonomic grip, a manual safety lever, and a reversible magazine release button.

The CCP employs what Walther calls the SoftCoil system. This is essentially a gas piston, which serves not only to reduce recoil but also to make it easier to rack the slide, a critical feature for shooters with reduced hand strength. It’s not just a unique take on concealed carrying pistols; it’s a unique pistol in its own right.

You may have heard of Steyr’s iconic AUG and Scout rifles, but did you know it also makes pistols?

The Steyr S9A1 is part of the so-called Steyr M series of polymer-framed pistols. Each model name is extremely straightforward; the letter (L, M, C, or S) refers to the pistol’s size factor. The numbers indicate chambering, and the “A1” designation indicates it is an improvement over a previous version. In this case, “S9” means it is a subcompact 9mm pistol.

On paper, this handgun seems nearly identical to the Glock 26. They have very similar dimensions, and both are 9mm, striker-fired, subcompact pistols with a trigger safety, and sold with double-stack, 10-round magazines. They are even of Austrian origin.

Despite these many similarities, the S9A1 has its share of stand-out attributes. It features a low bore axis, an unusual set of trapezoidal iron sights, and a 5-lb. trigger pull, all of which contribute to making the S9A1 an accurate and comfortable pistol.

“Easy to operate.” These are the three words most likely to describe what the M&P Shield EZ is all about. Smith & Wesson’s promise with the EZ line is that of a compact, concealable pistol that is easy to load, easy to rack, and easy to disassemble.

Magazines are single-stack and possess side tabs, like on most .22 LR pistol magazines, and loading them is easy. Field stripping is a breeze, thanks to its large takedown lever, and reveals that the pistol is, in reality, hammer-fired. The hammer is internal and helps make the slide easier to rack than a striker-fired pistol.

At first, the EZ was only available in .380 ACP, a cartridge often compared to (and overshadowed by) the more powerful 9mm Luger. Some shooters believe .380 to be the bare minimum for self-defense while others consider it to fall just short of what’s acceptable. So when the EZ .380 came out, many shooters dismissed it when they saw there was no 9mm version offered.

That version is now available, and it fulfills all of the initial promises, but in 9mm. All Shield EZ pistols feature a grip safety and are available with or without an ambidextrous manual safety. With the manual safety, the manual of arms is very similar to that of a 1911; if you’re used to shooting one but do not find it practical to carry a compact 1911 as part of your EDC, this may be an option for you.

Although not a true 1911 in the purest sense, the P938 is designed to have almost the same look, feel, and controls as John Browning’s most significant invention, but in a small, easily concealed platform. The main difference between the P938 and a traditional 1911 is the lack of grip safety.

The P938 has many of the same features in all the same places as the 1911. These include a magazine release button, a slide release lever, a manual safety, and a hammer. The P938 is an authentic, single-action only pistol, designed to be carried Condition One (full magazine, loaded chamber, safety on).

With an overall length of just under 6 inches, the P938 is ideal for deep concealment, such as pocket carrying. Shooters with small hands will appreciate it the most; others may find it doesn’t leave enough space for a comfortable hold, especially when using the flush-fit 6-round magazine. Fortunately, SIG also makes a 7-round magazine with a large baseplate, which should alleviate those issues.

Few people think of Mossberg when they’re thinking about purchasing a new handgun. Fewer people know that the brand used to produce handguns; the Mossberg Brownie was a 4-shot, .22 LR derringer, and until 2019, the only handgun the company had ever manufactured.

First unveiled at SHOT Show 2019, the MC1sc was the first model to become the MC series of pistols eventually. A second model, the MC2c, was introduced the next year, in January 2020.

The MC line of pistols stands out with their safety systems, combining a trigger safety, optional manual safety (unusual for a pistol, it is a cross-bolt system), and a unique field stripping procedure dubbed Safe Takedown System. The STS lets the user remove the entire striker assembly from the back of the slide before separating it from the frame, all without the need to pull the trigger.

Although the MC2c is a compact pistol, meant to be larger than the subcompact MC1sc, it is still a remarkably small handgun that should be easy to conceal, especially considering its magazine capacity; 13 rounds with the flush-fit magazine, or a full 15 rounds with the extended baseplate.

The VP9SK is the compact version of the Heckler & Koch VP9. Although the VP9 is not the first striker-fired pistol in H&K’s long history (there were 2; the excellent P7 and the not-so-excellent VP70), it’s perhaps the most accessible and affordable.

With a cold hammer-forged steel barrel and a steel slide on a polymer frame, the VP9SK is built like any other H&K firearm: to last a lifetime, and then some. Like many modern striker-fired pistols, the VP9SK has no manual safety, opting to use a trigger-mounted safety instead, and has interchangeable backstraps to fit different hands.

Where it differs from the competition is that the VP9SK, like the VP9, lets the user change the backstrap and the side panels, allowing for a vast amount of different grip and panel combinations. The slide also features front and rear slide serrations and wings that the user can grab to ensure a better purchase on the slide and make it easier to rack it.

Standard magazine capacity is 10 rounds for a flush-fit magazine and 12 rounds for a magazine with the extended finger rest. The VP9SK is also compatible with VP9, P30, and P30SK magazines; they are fully interchangeable.

If you’re new to concealed carry or you’re just looking to upgrade your EDC pistol, these options are a great place to start. For more information on concealed carry 9mm handguns, call our team at IFA Tactical for expert advice at (596) 275-2176.