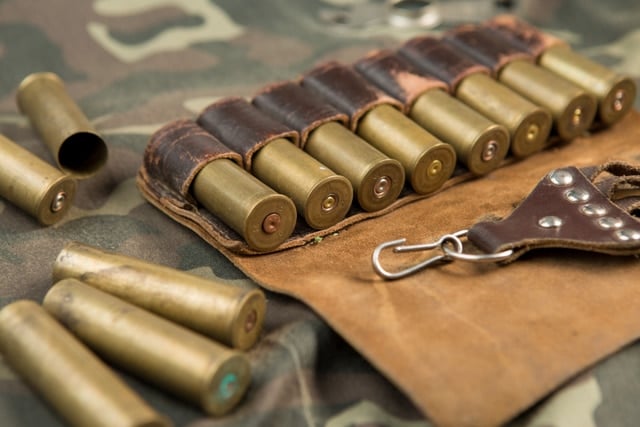 Buying shotgun ammo online is a simple and effortless way to get your shells with minimal effort. There are many cheap shotgun ammo types for sale online. We can help you locate whatever types of shotgun shells you desire: tactical shotgun ammo, rifled slug, bird shot, 00 buckshot, sabot slugs, and more. Buying from IFA Tactical makes all purchases efficient and easy.

Shopping online is particularly helpful for the shopper who knows exactly what they’re looking for but is short on time. It’s also a great option for those looking for hard-to-locate ammo.

Shotgun ammo comes in different sizes, referred to as gauges. A 12 or 20 gauge are the most common sizes though recently there has been a slight resurgence of the 16 gauge shotgun shell. A 12 gauge is larger than a 20 gauge, as the numbers refer to the number of pellets or balls that can be made from one pound of lead.

The 12 gauge shotgun is probably the most popular type among hunters and for home defense. The ballistic performance of a 12 gauge is sound. Using Federal Premium slugs, the muzzle velocity reaches 1,500 feet per second.

The effective range of a 12 gauge is about 50 yards.

Many people use 20 gauge shotguns to hunt birds such as quail and turkey. A 20 gauge gun is lighter than a 12 gauge and has less recoil, making it popular among novice shooters. The muzzle velocity of a 20 gauge using Federal Premium sabot slugs is only slightly less than a 12 gauge, approximately 1450 feet per second.

16 gauge weapons have been around since the early part of the 20th century. By the 1950s the popularity of the 12 gauge caused many manufacturers to stop producing these rounds. However, the 16 gauge has never been completely out of stock. Recently, Remington, Federal, and Winchester, who never let the round go out of production, have begun producing special 16 gauge loads such as very fast copper-plated lead shot for ducks and other game birds.

The three most common types of shotgun ammo are birdshot, buckshot, and slugs. Each has different uses and scatter in different ways when fired. Birdshot is typically used for hunting flying wildlife such as quail or ducks. The birdshot is made of tiny pellets or lead balls. When it is fired, it scatters. This makes it ideal for hitting a bird in flight.

The loads vary depending on what sort of game you may hunt.

Double-aught buckshot is similar to birdshot in that it’s made up of pellets or balls. However, these pellets are larger and can do more damage. This makes them good for hunting large game, such as deer or elk.

Slug is a solid shot, rather than one made up of pellets. Slugs can be the most damaging of the three types of shotgun ammo. However, you can buy slugs that inflict less-than-lethal wounds including shells loaded and made from rubber and wax.

Whichever type of ammo you’re looking for, finding it online can be quick and painless. Buy your shotgun ammunition now at our online marketplace or visit our brick and mortar location today.

The company also manufactures their own original revolver, called the Chiappa Rhino.

Chiappa manufactures various models of pistols, as well as lever-action, combination, and triple-barreled shotguns. They’ve made everything from Badger rifles to 9mm and .22LR M1 carbines and more. Some of the Colt 1911 and Beretta 92 replica pistols come in a .22 LR caliber, and different finishes and grips are available. These are the Chiappa 1911-22, which is a Colt 1911 5-inch replica, a Chiappa M9-22, made after a Beretta 92.

Which Shotgun Shell Is Best for Home Defense?

For home defense,although some experienced gun owners deploy a rifle and pistol, most people prefer a shotgun. Shotguns are easy to use, even by untrained individuals, and are point and shoot weapons. The wide shot pattern means the shooter need not take careful aim. It only takes one shotgun blast at close range in the general direction of the target to stop virtually any threat.

You can use whatever type of shotgun load you want as all likely will be effective against an intruder. Although a shotgun loaded with rock salt or even buck shot may not kill, depending on what part of the body it hits the target, a shotgun slug is usually lethal.

Two of the most popular home defense shotguns for the past several decades are the Remington and the Mossberg. Each company manufactures several models, depending on personal preference.

Remington sells a model specifically made for home defense named the 870 Home Defense with a 6-round tubular magazine. This model, with an 18 ½ inch barrel and fixed choke, gives you excellent firepower in the confined quarters of a home.

The weight is a bit higher than some, 8.5 pounds, however, this lessens the recoil and makes it more practical for home defense.

The price is reasonable too, usually below $500.

A slightly pricier model, the 870 Express Tactical, is not only popular as a home defense gun but used by many law enforcement agencies.

It has the same barrel length as the 870 Home Defense model with a six-plus-one load capacity.

The Mossberg 590 Tactical has an 18 ½ inch barrel and you can load six-plus-one rounds in it.

Matte blue with a pistol grip, this model is very popular among shotgun users in general.

Mossberg is also known for being very upgradable with numerous after-market parts available.

Mossberg makes many different models of the 590 tactical, including 20 gauge and .410 versions. There is even a nine-shot model for those requiring more firepower.

Italians have long been known as exceptionally good at crafting high-quality weapons.

The Benelli M4, with its self-regulating gas system, provides shooters who prefer semi-auto shotguns with a great home defense option.

Like its competitors, the barrel is 18 ½ inches and has a magazine capacity of six shells, five-plus-one.

Like the Mossberg, it has a pistol grip making it easy to deploy. The gun also has a picatinny rail for optics along with a ghost ring sight.

The U.S. Marines and many security services all over the world use this Benelli masterpiece.

The Benelli is the priciest of all options but the fine craftsmanship and semi-auto operation may make it worthwhile.