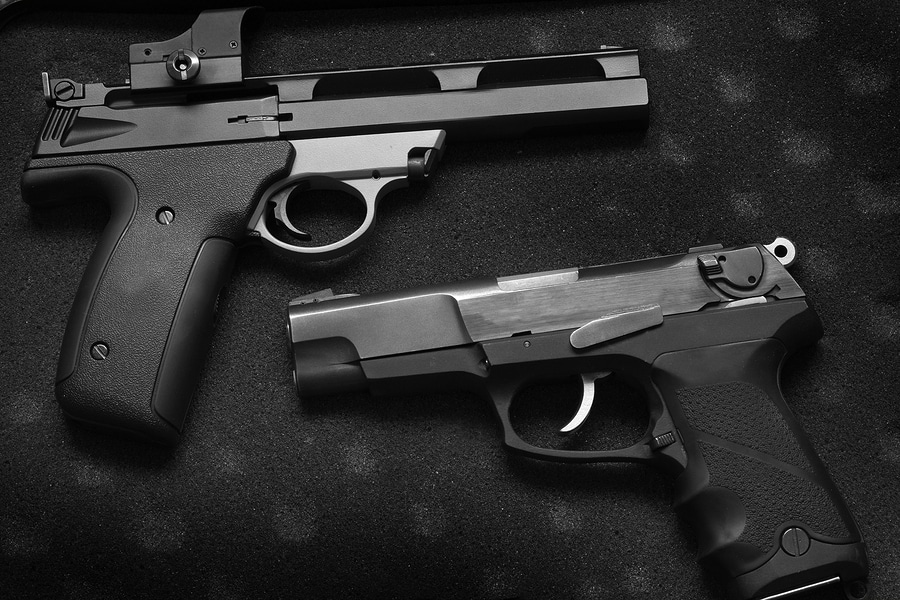 Colt Defense, Heckler & Koch, Glock, and SIG Sauer – these are names of some of the best handgun makers in the world.

A handgun is a type of firearm that is short-barrelled and can be carried and operated with a single hand. Today, the most common variants of handgun types are semi-automatic pistols and revolvers.

Handguns are portable, easy to carry, and are ideal for close quarter encounters. Compared to knives, a handgun sidearm packs a lot more stopping power, and it’s an indispensable weapon in a soldier or police officer’s arsenal.

In the past, handguns were often considered a badge of office in the military and police. It was held in the same regard as a sword.

Because handguns have limited utility on the battlefield and were more expensive than the long-guns, handguns were carried only by a select few who could afford them.

Across the world, handguns are usually used as a self-defense weapon by police and military officers.

Handguns are also easily concealed — an attribute that is convenient for civilians who wish to bear arms for self-defense. Today, most handguns for sale are produced by foreign companies such as Glock, SIG Sauer, and Heckler & Koch, leaving only a handful of gun makers who chose to keep the art of pistol gun-making alive in the U.S.

Smith & Wesson is one of America’s oldest and finest firearm makers for over 164 years, with roots dating as early as the American Civil War.

The S&W Model 10 is one of the world’s most popular handguns in the 20th century, which went on to see 6 million handguns in production.

Colt’s, which supplies guns to the military, police, and civilian market, has built firearms in Connecticut since 1847.

Despite facing bankruptcy issues in 2016, and losing its foothold in the military and law enforcement market, nobody can deny the gunmaker’s impact on modern American history.

Colt is responsible for producing iconic handguns, including the Single Action Army and 1911. Often imitated, but rarely surpassed, these guns have become a significant part of American gun culture.

Better known by gun enthusiasts as Ruger, Sturm, Ruger & Co., Inc is an American gun making company based in Connecticut which started in 1949.

Today, Ruger is responsible for the SR-Series semi-automatic pistol, which Ruger claims is one of the world’s thinnest double-stack handguns available in the market today.

Because of its slim profile, the SR-series are a popular choice for legal enforcement officers as a backup weapon and civilian concealed carriers.

Springfield is most notably known for making military carbines and rifles such as the M1903 and the M14. Closed in 1968 by the federal government, it was later resurrected in 1974 to move into producing weapons for the domestic market.

With their motto “The First Name in American Firearms,” Springfield went on to produce high-quality clones of iconic firearms, like 1911.

Springfield is also responsible for some of the most popular polymer frame 9mm handguns available in the market today, such as the XD series, which are based on the Croatian HS2000.

Add an American handgun to your collection

IFA Tactical is proud to carry some of the finest American handgun brands in the market, including Smith & Wesson and Ruger.