Can You Legally Own a Semi-Automatic Rifle? If you’re a new gun owner, you may have realized that firearm terminology and jargon are vast and sometimes confusing.

Many people, including lawmakers and politicians, often misuse some of these terms without fully understanding their proper definitions, particularly in the wake of tragedies such as the 2017 Las Vegas mass shootings. 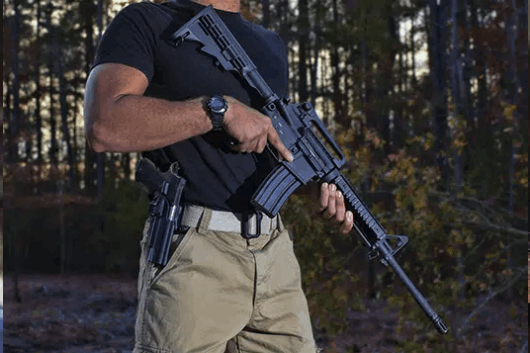 One of the most commonly misunderstood firearm terms is the meaning of “automatic.”

An automatic weapon is capable of continuous fire until the shooter lets go of the trigger, the ammunition runs out, or a malfunction occurs. Synonym terms are fully automatic or simply “full-auto.” Types of firearms that fall under this description include assault rifles, machine guns, and submachine guns.

A semi-automatic firearm is capable of shooting only one round per trigger pull. Semi-automatic firearms include most rifles and pistols and a significant number of shotguns. They are readily available and legal to own everywhere in the United States.

Semi-automatics are sometimes referred to as “automatics,” even though they are not truly automatic, because of the jargon term “autoloader.” An autoloader is more correctly called a self-loading firearm: a firearm with a mechanism capable of automatically loading a fresh round after firing the last one, without the need to manually actuate a bolt, pump, or lever between each shot.

All semi-automatic and fully automatic firearms are self-loading by nature, the only difference being in the number of shots fired per trigger pull.

A selective-fire (or select-fire) firearm is a firearm that lets you choose between semi-automatic and fully-automatic via a lever, knob, button, or another similar mechanism.

Under United States federal law, all selective-fire weapons fall under the legal definition of a machine gun.

The government regulates machine under three federal gun laws: the National Firearms Act of 1934 (NFA), the Gun Control Act of 1968 (GCA), and a section of the Firearms Owners Protection Act of 1986 (FOPA) referred to as the Hughes Amendment.

These laws are enforced by the Bureau of Alcohol, Tobacco, Firearms, and Explosives (ATF) in all fifty states and US territories, including the District of Columbia.

In effect, these laws prohibit the possession of assault rifles and other machine guns unless the buyer fulfills many prohibitive criteria:

A machine gun lawfully registered before May 19, 1986, is referred to as transferable.

All machine guns made after this date cannot be sold or transferred to civilians, making the supply of transferable machine guns effectively fixed. This fixed supply renders machine guns excessively more expensive than regular firearms, ranging from $5,000 to over $75,000, depending on model, condition, and rarity.

What is an Assault Weapon?

The term “assault weapon” is generally employed to describe firearms that are technically not assault rifles but possess certain features and an appearance resembling those of an assault rifle. Assault weapons are no more lethal or dangerous than semi-automatic firearms not defined as assault weapons.

The Federal Assault Weapons Ban of 1994 (AWB) defined an assault weapon as a centerfire semi-automatic firearm capable of accepting a detachable magazine and at least two unacceptable features, such as a folding stock, a bayonet lug, a threaded barrel, or a barrel shroud.

Although the AWB is no longer federal law since 2004, specific states restrict firearms with similar assault weapon statutes and legal definitions, such as New York and California.

In short, while both are technically legal, it is relatively easy to purchase and own a semi-automatic weapon anywhere in the United States. In contrast, fully automatic firearms are inaccessible to the average American because of tight regulations.

If you’re in the market for a new firearm, IFA Tactical offers a large selection of pistols, revolvers, rifles, and shotguns. We also sell ammunition, accessories and provide a range of services such as gunsmithing and Cerakoting. For any information or requests, call us at (586) 275-2176.