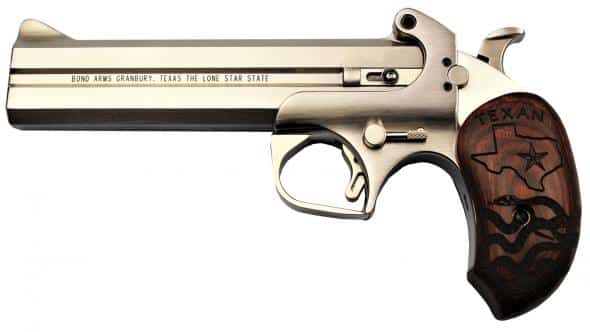 Certain everyday situations can become dangerous, or just make people uneasy. For example, imagine walking alone in a dark alley, or wandering about in the wrong part of the town. Somebody could attack you; the risk is real. You’d feel safer carrying a gun, just in case worst-case scenario happens, but you don’t want to walk around holding one in plain sight.

You ideally want a tiny, concealable gun, and that’s what derringer guns are perfect for.

History of the Derringer

In the late 1800s, derringer guns were popular with women, and they remain popular with many women today. They are small, unintimidating, simple to use, lightweight, and truthfully, they are quite cute.

These tiny guns were first invented in 1852 by Henry Deringer. The original model was a single shot muzzleloading percussion can pistol, typically .41 caliber with rifled bores, and walnut stocks. They were made from a copper-nickel allow, and the barrel length varied between 1.5 and 6 inches.

Approximately 15,000 pistols were manufactured at the time. The design caught on, and other companies started producing their own versions.

The Philadelphia Deringer was sold in pairs, offering a second shot in case the first one failed. This compensated for the small size and capacity of the pistol.

Today, a derringer refers to any small handgun that is not a revolver or a semi-automatic pistol.

Some people tend to view these tiny handguns as nothing more than a novelty. They think derringers are too small, too underpowered, too limited. But they are not useless. They were first used by military officers, after which they gained popularity among civilians looking for a concealable gun that could fit in their pocket.

They became particularly popular with women, who would hide them in their purses.

The best-known use of a Philadelphia Deringer was probably by John Wilkes Booth. Booth used the gun to assassinate Abraham Lincoln in the Ford theater.

Although the Philadelphia Deringer is the original model, Remington’s later design is the one most commonly associated with derringers. Remington’s derringer featured an over and under design, which doubled the capacity of the gun. It also used metal cartridges, which increased its staying power.

Cartridges evolved over time thanks to the use of smokeless powder, allowing them to become smaller and more powerful.

Many companies today are still reproducing the Remington design in various calibers, from .22 LR to .410 shotshells.

Cobra derringers are more affordable than most other companies’ derringers, and they come in a wider variety of calibers.

Derringer firearms may lack firepower compared to other kinds of pistols or revolvers, but they are perfect for deep concealment. They are the ultimate concealed carry dream, discreet, and easily hidden no matter what you’re wearing. They offer a unique option in that regard, and they can be a lot of fun to shoot as well. These handguns have been around for nearly two centuries now, serving men and women alike, and, despite their size, they’ve played a significant part in shaping our modern history.

Buy derringer firearms online from our store and be amazed at what these little guys are capable of.