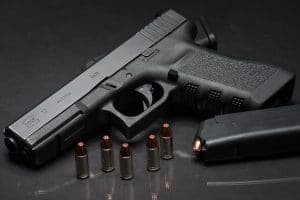 A single action automatic pistol refers to the task the trigger performs when pulled. In a single action, all it does is release the firing pin to shoot the round.

So a single trigger pull results in a single bullet fired. In order to fire, the hammer must be manually cocked before pulling the trigger.

A double action, which is also frequently seen, performs two functions. On the first half of the pull, it chambers the round and draws back the hammer. Then, on the second half of the pull, it releases the firing pin. So all it takes is repeatedly pulling the trigger to fire bullets.

A single action takes less strength to pull, as it’s usually around 4 pounds of pressure. Double action is a longer draw and takes more like 6.5 pounds of pressure. None of this makes one better over the other, but rather serves to demonstrate the differences between the two.

Why Choose a Single Action 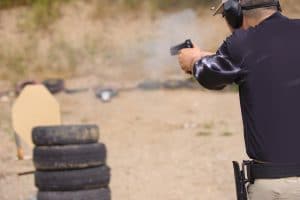 Single action handguns tend to have a lighter pull weight, which makes them easier for beginners to shoot. Some feel that the pull is smoother, which helps in accuracy, as well.

As far as speed goes, with semi-automatic weapons – often known as automatic – there is little difference. On a single shot the hammer must be pulled back the first time to cock the weapon, but after that, it relies only on pulling the trigger. Double actions simply don’t require that first hammer pull.

Many prefer the single action as it’s safer due to the need to pull the hammer back first. As well, the lighter trigger pull is more comfortable and makes it easier to fire multiple rounds at the range.