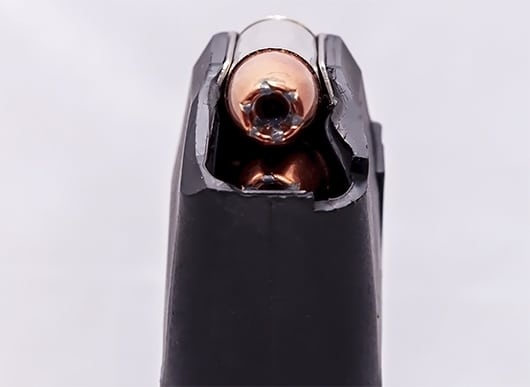 The 9x19mm Parabellum, also called 9mm Luger, is the world’s most widely used handgun cartridge, with over a hundred years of proven performance. If you have recently purchased your first self-defense handgun, or if you are thinking about it, chances are you’ve been recommended a handgun chambered in 9mm Parabellum.

This guide offers a selection of the best 9mm self-defense ammo available today.

For personal protection, jacketed hollow points are the most efficient type of ammunition. As the name suggests, JHP ammunition possesses an open cavity at the tip designed to expand on impact.

The two most important criteria to keep in mind when selecting self-defense ammunition are penetration and expansion.

Adequate penetration is the most critical element of a good self-defense bullet. The bullet must create a wound channel that will reach deep enough to strike the vital organs, but not so deep that it passes clean through and hits something or someone behind – a phenomenon called over-penetration.

According to the FBI, an adequate self-defense bullet must reach between 12 and 18 inches of penetration inside a standard block of ballistic gelatin.

Expansion is the second most important criterion. A 9mm bullet starts with a diameter of about 0.355 inches but may expand to double this size. The wider the expanded diameter, the greater the wound cavity, and therefore the more effective when in a defensive situation. Speer’s Gold Dot line of defensive ammunition is the most popular choice for law enforcement agencies across the nation, with over 20 years of proven, real-world performance. The Gold Dot line of ammunition was the first to introduce bonded cores, eliminating undesirable effects such as core-jacket separation.

Originally designed to meet law enforcement needs, Speer Gold Dot ammunition is also available to civilian shooters in a wide variety of calibers and bullet weights. We recommend the 124 grain +P load for personal defense, as it provides the most consistent performance.

This line of hollow-point ammunition features a distinctive V-shaped hollow point cavity. Loaded with low-flash propellant and designed for reliable expansion, the V-Crown line is an excellent choice for personal defense, whether your handgun is a SIG Sauer or not.

Hornady’s Critical Defense ammunition is recognizable by their corrosion-resistant nickel-plated cases and their Hornady FTX bullets.

FTX bullets feature a red polymer ballistic tip lodged in the hollow cavity. This ballistic tip allows the bullet to expand on impact while preventing foreign material from clogging the cavity, which can hinder or stop the bullet from expanding correctly.

Critical Defense ammunition is available in either 115 grain or “Lite” 100 grain. Both are optimized for use in short-barreled concealed carrying handguns through quick-burning, low-flash propellants.

First introduced in 1991, the original line of Golden Saber bullets was purpose-built to meet the FBI’s requirements at the time, delivering consistent expansion. However, the original Golden Saber frequently suffered from core-jacket separation, particularly after passing through barriers such as automotive glass.

In 1998, the design was improved, with the introduction of a Bonded version of the Golden Saber, which eliminated the core-jacket separation issue and resulted in even more consistent performance. At first, Remington restricted the sale of Golden Saber Bonded ammunition to law enforcement, but has since released them on the civilian market, quickly becoming a very popular 9mm defensive ammunition.

Remington Golden Saber Bonded is available in standard pressure and +P, in either 124 or 147 grain.

The Federal Premium HST line was introduced in 2002 and was initially only available to law enforcement, only first becoming available to civilians in 2015.

Rather than bonding the lead core to the jacket, HST bullets are constructed using a cannelure, designed to mechanically hold the core and jacket together at the base and maximizing weight retention. When fully expanded, an HST bullet expands into a distinctive shape, reminiscent of a six-pointed star.

Despite the name change, Winchester Defender ammunition features the same proprietary bullet bonding technology. Defender bullets expand into six segments upon impact, up to 1.5 times the original bullet diameter. In 9mm, this translates to an average expanded diameter of 0.53 inches, larger than a .50 caliber bullet.

If Critical Defense ammunition is optimized for use in short-barreled handguns, Critical Duty ammunition is, as the name suggests, explicitly intended for duty use in full-size pistols.

While this translates into more felt recoil (especially when using one of the +P loads) and a little less expansion, this is the sort of trade-off you’d expect when engineering a bullet towards consistent penetration.

Hornady’s 9mm Critical Duty ammunition is available in 124 grain +P, 135 grain standard pressure, and 135 grain +P. Most notably, the FBI adopted the 135 grain +P load for service use in 2018. If federal agents across the country can count on this ammunition for their self-protection, you can as well.

IFA Tactical offers a large selection of ammunition for your self-defense handguns and more. Browse our online inventory and buy from the convenience of your home, and do not hesitate to call us at (586) 275-2176 if you have any questions.