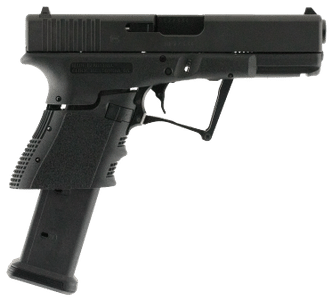 Although guns can be used for sport, many gun owners use handguns for home safety and self-protection. Whether you live alone or with family members, you need to protect your home and yourself from intruders.

If you’re inexperienced with handguns, or trying to get an idea of what handgun is best for home defense, you may be unsure where to start. Below, you’ll find a list of the top ten defense handguns. Each has different pros and cons, including size, accuracy, recoil, magazine capacity, and the ability to customize it with different sights.

Firearms should be handled responsibly and kept in a safe place that can’t easily be accessed by young children when they’re not in use. All necessary licenses and permits should be held by the owner before making the purchase.

Glock 19s are the most widely-used service pistols for law enforcement officials and military personnel. Smaller than the Glock 17 and in the same class as the SIG Sauer P226, a Glock 19 is great for home defense due to its reliability.

The Full Conceal M3 Glock 19 is a compact folding handgun that fires 22 rounds of 9mm Luger ammo. Jacketed hollow points may be best to use for home protection, as the stopping power definitely halts would-be intruders.

For situations where this is a low level of visibility, red dot sights or night sights can be added as accessories. The folded trigger safety bar prevents the trigger bar from moving, so this pistol prioritizes the safety of the owner.

This is another handgun that’s often used by military personnel, as M&P stands for Military & Police. The Smith & Wesson M&P Shield is a double-action pistol that uses a single-stack magazine to increase its concealability.

The stopping power found in Smith & Wesson M&P Shields makes them highly desirable for both self-protection and home defense.

Although the sights are well-liked by users, night sights and lasers can be attached to it as well. With a comfortable recoil, this is by far one of the best handguns to utilize for a defense situation.

One of the best 9mm handguns, the Springfield XD(M) is easy to shoot and great for shooting from longer distances.

The competition model has both an adjustable rear sight and an orange fiber optic front sight. With its lightning cut reducing the weight of the weapon, recoil is minimized and the weapon can cycle faster. It’s considered a particularly accurate handgun.

The Springfield XD(M) holds 19 rounds of 9mm ammo in a fit magazine. However, it’s an easy-to-use starter pistol due to its small size. In addition, features like a loaded chamber indicator and triple safety handguards make it a great handgun for inexperienced shooters.

Produced in 1975 by Josef and Frantisef Kouchy, the CZ-75 is based on the Browning Hi-Power. It’s used primarily by Czech and Turkish policemen, as this handgun was designed in the Czech Republic. There are multiple police departments in the U.S. that use them as well.

An accurate locked breech pistol with a short recoil, different models of the CZ-75 have variations to the trigger system. There is a decock-only, double-action only, and a single-action system, each with their own pros and cons.

While standard models have fixed sights, combat models have adjustable sights that allow the shooter to compensate for both wind and elevation. A 9mm pistol, the CZ-75 can hold up to 16 rounds. 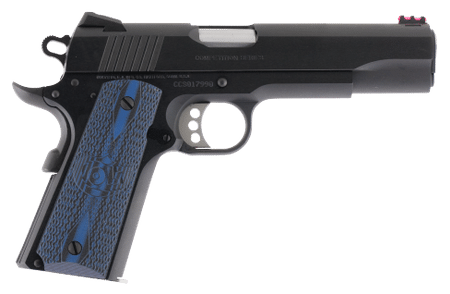 The Colt 1911 is a semi-automatic pistol that’s great for self-defense. Introduced in 1911, it was the first semi-automatic handgun used by the U.S. military. It’s such a popular home defense model that nearly every U.S. manufacturer has released its own version of the handgun.

It’s both accurate and easily modified to fit its owners needs, particularly in fine tuning the trigger. As it’s a larger pistol, it may not be the right handgun for some users, especially if you have smaller hands. However, for individuals with a large grip, it could be just what they’re looking for.

You must be careful when lowering the handle due to the absence of a decocker.

A 9mm handgun with a high magazine capacity, the Hi-Power is a highly popular firearm. It even inspired the creation of the CZ-75.

The Hi-Power has a single-action trigger with a very short reset and the steel grip is particularly comfortable for the owner. With either 13-round or 15-round magazines, the Hi-Power can use 9mm or .40 S&W ammo.

The downside is that Browning Hi-Powers are no longer being produced in the U.S.

It’s still possible to find them from gun dealers, especially if you’re fine with purchasing a used firearm. It’s worth the research and investment to find online gun dealers who still sell the Hi-Power, as the Hi-Power is one of the most comfortable handguns to shoot accurately in a home defense situation.

Compatible with the P99 and similar to a Glock, the Walther PPQ is an underrated semi-auto handgun. In fact, Walther is one of the more underrated gun manufacturers.

The Walther PPQ is a striker-fired handgun with a light trigger pull. There’s also an ambidextrous slide release lever that makes it usable for both right-handed and left-handed shooters. Factor in the three-finger grooves and a comfortable grip handle, it’s designed quite well ergonomically.

Although it lacks an external safety, there’s a benefit to that situation. You may find yourself in a high-pressure situation where there’s little time to do anything but shoot. However, there is a loaded chamber indicator, as well as a Picatinny rail, so that owners can add lights or a laser to it. 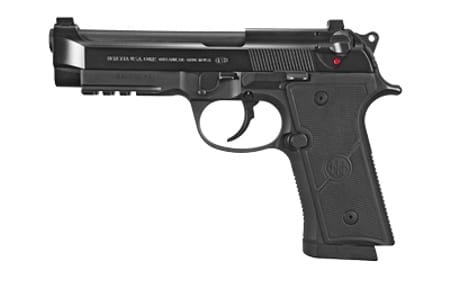 The general issue handgun for the U.S. military, the Beretta M92 is a heavy-duty handgun without a lot of recoil. That makes it great for inexperienced shooters or those who aren’t physically as strong as others might be.

Additionally, these firearms can be fitted with 15-round, 17-round, or 32-round magazines and still function perfectly. It shouldn’t take 32 shots to bring down an intruder. Nonetheless, the magazine capacity only brings extra confidence for the shooter.

The Beretta M92 is a highly reliable 9mm handgun with 3-dot sights that should be in everyone’s list as they look for the perfect handgun for home defense. There are several versions of the Beretta M92, which include compact versions as well for those who prioritize concealed carry.

The VP9 is Heckler & Koch’s first striker-fired pistol since the 1980s. A cold-hammer forged barrel made of cannon-grade steel ensures the durability and longevity of this handgun. In addition, the Hostile Environment finish protects the slide from both corrosion and wear.

With 3-dot sights and a Picatinny rail for customization, there’s plenty of opportunity to make sure that the shooter hits their target. The ambidextrous slide handle, three-finger grooves, and a light trigger pull only make this handgun more desirable.

The affordable HK VP9 won’t put a dent in your pockets. That’s yet another reason it’s one of the top handguns to purchase for home defense.

The only revolver on the list, the Ruger SP101 is a double-action handgun, similar to the Ruger Gp100. It only holds five rounds, but has plenty of stopping power, which comes in handy when neutralizing a would-be intruder.

Easily concealable and easy to maneuver due to its size, the Ruger SP101 is one of the top home defense guns. No matter the size, age, or gender of the owner, it should be one of the easiest handguns to wield.

It’s comfortable to hold with a cushioned grip system and no metal exposed in the back. The triple-locking system secures the cylinder in the frame at the front, bottom, and rear.

The majority of these handguns are manufactured by the most renowned gunmakers in the world. Additionally, a number of these firearms have been chosen as the official handgun for military and law enforcement personnel across different countries.

At IFA Tactical, we provide the best handguns for home defense at competitive prices. Browse our online inventory and buy from the convenience of your home. For more information about any of our firearms give us a call at (586) 209-3595.