Home » Rifles » Revolver » Famous Revolvers in Movies and their Brands

Famous Revolvers in Movies and their Brands 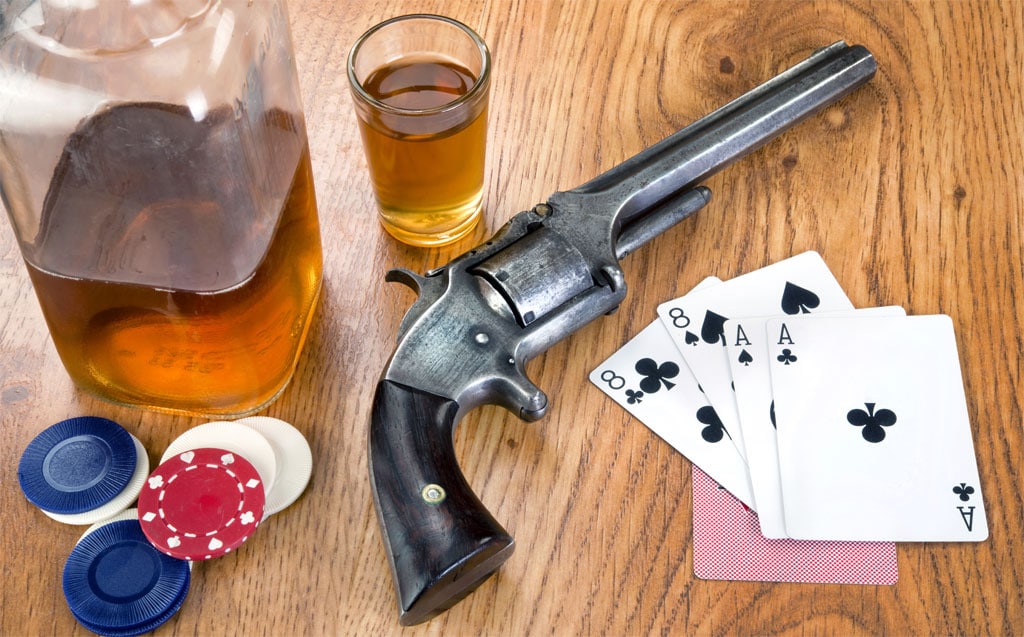 The revolver rifle used by Steve McQueen in the 1950s TV series Wanted Dead or Alive is not the only weapon made famous in film. Since the earliest days of TV and movies, certain revolvers, revolving carbines, and prop guns with longer barrels have become instantly recognizable due primarily to the popularity of the film in which the guns appeared.

Here are just a few of the revolvers made famous due to movies or TV series that handgun hunters would be thrilled to look down the iron sights of.

This cap and ball, also called a percussion cap pistol was one of the most popular handguns of its day. The .44 caliber round had excellent stopping power. During the Civil War Union and Confederate soldiers often carried two, given the ability to fire six rounds without reloading, something relatively new during an era dominated by bolt actions and single shot pistols.

Many famous 19th-century figures carried Navy Colts at one time during their careers also.

The gun ceased production in 1873. However, the cinema kept history alive by re-introducing millions of people to what the weapon looked like despite guns evolving and changing rapidly in the last 150 years.

In The Good, The Bad, and The Ugly, not only did Clint Eastwood carry one, but also most of the other minor characters used one including Tuco played by Eli Wallach.

More recently, in the 2007 version of 3:10 to Yuma, the main character escorting outlaw Ben Wade, played by Russel Crowe, used a Navy Colt.

In the TV series WestWorld, William carries an 1851 Colt.

This gun has seen a lot of action in films and Television. For most of the first 75 years of the 20th century, police departments all over the country used .38 specials.

Military pilots and sailors carried the Smith & Wesson .38s during World War II. By the 1980s, most departments have changed to a weapon with more firepower, the 9mm semi-automatic.

However, millennials and others today still easily recognize the single-action revolver due to its popularity in film and TV.

Hannibal Smith in The A-Team also regularly carried one.

Ruger introduced the Ruger Blackhawk in the mid-1950s. The sturdy frame and springs allowed the gun to handle .357 and .44 Magnum loads.

The Blackhawk makes an excellent hunting handgun. The .44 caliber version can take down bear and buffalo.

The impressive look and sound of a Ruger Blackhawk made it a great fit for certain characters and scripts. The British Army used the stainless steel Webley Revolver officially from 1887 until 1932, although many British troops in World War II carried Webley’s.

The original pistol used a black powder cartridge, and it wasn’t until 1913 that a smokeless powder version became available.

There was even a model, the 1894 Webley Mk II, that had a removable steel blade.

The Webley has made an appearance as the gun-of-choice in several very popular movies including the Indiana Jones films where Harrison Ford carried it.

Other great films where the central figures used Webley’s include Zulu, Lawrence of Arabia, and the 1999 version of The Mummy.

The TV series that ran from 1961-1969, The Avengers, showcased the Webley, as did the Doctor in several seasons of Dr. Who, and more recently Vulcan in American Gods and many of the gang members in Peaky Blinders.

Perhaps one of the most iconic magnum .44 revolvers in cinema, the Model 29 was designed for handgun hunting or as a back-up to more traditional hunting arms. For a pistol, this gun packs a wallop. This factor made it a little hard to sell when it was in regular production. Most people bought it and figured out that .44 magnum was a little too much power for them. However, the gun gained film notoriety from being featured in the Dirty Harry movies starring the legendary Clint Eastwood.