The .22 semi-automatic rifle was not the first gun Mossberg made; Mossberg has a long history of producing quality .22 caliber weapons.

Mossberg, officially O.F. Mossberg & Sons has been a family-held private company since Oscar Mossberg, a Swedish immigrant, founded the company and his great-grandson is the current CEO.

The very first weapon produced by Mossberg as a .22: A .22 caliber pocket pistol, the Brownie used by hunters to dispatch wounded or trapped game.

The company began producing the first .22 caliber rifles in the 1930s.

Since then, the Mossberg engineers have developed many lines of quality and popular .22 rifles, bolt-action, single shot, and semi-automatic guns that rival anything produced by Remington, Browning, Ruger or any other company.

The Mossberg 702 Plinkster was the first in the 702 Mossberg line of .22 caliber semi-autos that eventually led up to the 715T version.

Trustworthy and dependable, this original Plinkster comes with semi-automatic action, a synthetic stock, an 18-inch barrel, weighs 4.1 pounds, and factory-provides a 10-round magazine with each gun.

A Brazilian company, CBC, originally produced the weapon. Mossberg bought the rights and made several design changes to make it competitive in the North American marketplace.

A very straight-forward gun, the action, and mechanism make it very reliable and a value-buy for any .22 rifle lover.

Picking up a 702 for the first time, you might feel some concern that its light weight is.

The gun accepts lots of accessories too thanks to the modular-friendly design.

The original 715T began production in 2019. The gun quickly became very popular, and in 2012 Mossberg released a Flat Top version.

The earlier version has an AR-15-style fully adjustable rear sight mount and carry-handle molded into a polymer frame.

The Flat Top version added a Picatinny rail with a removable/adjustable front and rear sights.

The Flat Top version has more of an M4 feel to it and looks very similar to the AR-platform, center-fire carbines.

The Flat Top button-rifled barrel and the quad-rail fore-end permits you to add any popular AR accessories like optics, lights, or lasers.

Some available Mossberg models come with a six-position adjustable stock.

The designers at Mossberg did a great job creating a replica AR-15 in 22. caliber. The 715T looks almost exactly like an AR-15, including a dummy cocking handle.

With the excellent modification potential, the gun accepts just about any military-style accessory kits. The handle has a short rail, and the RIS front-end has four long ones.

If you want to replicate your tactical AR-15, you can even add a night vision scope.

The stock, all plastic, is durable but certainly not made from high-quality polymer.

The metal parts stand up, and many owners report putting 3,000 or more rounds through the barrel with no problems.

Since this gun fires .22 rimfire, the weapon can get dirty quickly. One drawback is the disassembly requires removing 15 screws, 13 Phillips and 2 Allen before you can completely wipe down the gun. 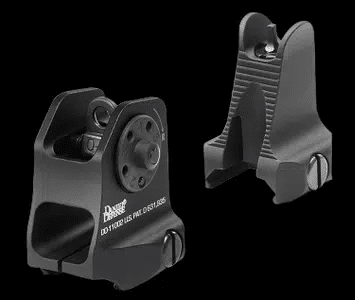 The 715T has a standard cross-bolt safety. The side-to-side movement is snug and not too loose, snapping into place without faltering or catching in the middle.

The non-removable sights let you adjust for windage and elevation.

The bolt hold-open works by pushing the charging handle in when fully retracted, just like in a standard AR-15.

When you pull the handle, the bolt will slide forward to chamber a round.

Once you empty the gun, the bolt hold-open locks in place, but also uses the magazine follower as a stop. This means you must manually cycle the action when switching magazines.