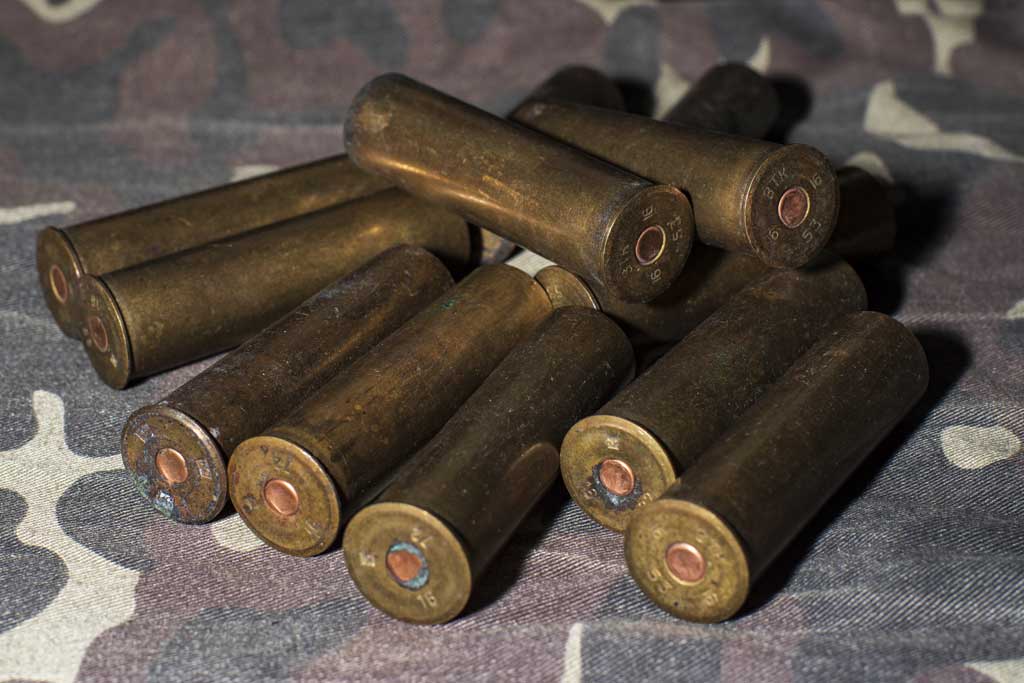 Cartridge-firing shotguns have existed since the 1860s. The most popular shotgun shell size in the United States, the 12 gauge, is still commonly used today, even after nearly 160 years of continuous existence.

In theory, shotgun shells produced 50 years, 75 years, or even 100 years ago could theoretically be chambered and fired in your modern-day shotguns no matter what type – from single barrel to semi auto. But is it a good idea?

Before finding out whether those old shells are safe to shoot, it is essential to review what you know about them first. If you’re familiar with shotguns, you know that loading the wrong gauge or shell size into your shotgun may be very dangerous.

The most basic information you need to know is the gauge and shell length. As obvious as it may seem, you may not have the original box, the markings on the shells may be faded and unreadable or even nonexistent.

The headstamp is not always guaranteed to give you useful information either; if you’re lucky, you’ll get the gauge and the manufacturer, but it’s not a guarantee on every shell.

When in doubt, use a pair of calipers to measure the shell’s diameter and overall length. If the measured diameter is around 0.72” to 0.73”, you most likely have a 12 gauge shell. Refer to a chart of gauge sizes for other dimensions.

In short, apply the same standard safety practices you would use with modern ammo; just be extra cautious if you don’t have the original packaging or don’t know for sure what your ammo’s dimensions are.

Above all, never use old ammunition for serious purposes, especially home defense and personal protection. Factory, high-quality ammunition, preferably of recent manufacture, should never be substituted. It is not worth betting your life on. Shotgun shells have been made out of various materials since their first introduction.

The most common is plastic with a brass case head. The plastic hull can be in one of many colors; sometimes, the color can be used to identify gauge and even projectile type, although this is not reliable because manufacturers have different standards.

All-brass cartridges were standard in the early days of shotgun cartridges and are still occasionally used today, mainly by reloaders. Although heavy, the all-brass construction is similar to pistol and rifle cartridges and is well-suited for reloading.

A third standard, which was very common a long time ago but has now fallen out of favor, is paper shotshells.

Paper was a ubiquitous material for shotgun shells from the mid-19th century to the mid-20th century, at which point they began being phased out in favor of more durable plastic. If you have vintage paper cartridges, you most likely have ammunition at least 60 years old.

Although paper is inexpensive, it is extremely vulnerable to moisture. If the ammunition was not stored under perfectly dry and cool conditions, the gunpowder inside is likely compromised. If you try to fire a paper shell with compromised powder, there is a high risk of getting a hang fire – a phenomenon where the powder ignition is delayed, resulting in a significant amount of time between trigger pull and gunshot.

If your shotgun goes “click” when you pull the trigger, keep it pointed in a safe direction and wait; hang firing cartridges can go off several seconds after the primer was struck.

A Matter of Age

Today, ammunition manufacturers often give the blanket statement that all factory ammunition shelf life is ten years. The reality is that things are not that simple.

New, factory ammunition can fail long before reaching one year past the manufacture date, and it’s common for decades-old ammo to fire just as it would have right off the conveyor belts. It all depends on storage conditions.

Even if your old shotgun ammunition doesn’t use paper hulls, the first brand of plastic shotgun shells commercially available in the United States was introduced by Peters Ammunition in 1960. As of today, it is still possible to find plastic shells that are over 50 years old.

Even if the shell is made of a durable material such as plastic or brass and is of the correct gauge and length for your shotgun, you should always inspect the shells for signs of degradation or damage, such as bulging, deformation, cracks, and other damage.

Check for any rust or corrosion on the brass heads as well; if you find any, it suggests that the ammo was improperly stored. If it doesn’t look safe to fire, you probably shouldn’t shoot it.

If you’ve bought the old ammunition in its original packaging, it doesn’t hurt to inspect that as well. Vintage boxes in good condition are a good sign; if the shells inside don’t look damaged either, it might just be good to go.

Of course, a straightforward way to dispose of old ammo is just to shoot it anyway. If there are no apparent signs that it may have been compromised, chances are it’ll work just fine.

If that’s your intention, pay extra attention to your firearm and bring tools to deal with bore obstructions. Don’t shoot too quickly and listen closely to the report; a weak gunshot might be a squib.

If you’re not so sure about shooting it, and you prefer getting rid of it, old ammo should be disposed of the same way as any bad or unwanted ammunition: safely.

Reloaders can recycle old ammo. Let your reloader friend have the old ammunition; not only are you likely to make them happy, but they’ll find a way to put it to use.

You can also call your local police department or waste disposal center to ask about ammunition disposal. Most will be happy to take your old and unwanted ammo, although it depends on the local departments and facilities.

Browse our online inventory and buy from the convenience of your home. Call us at (586) 275-2176 if you have any questions.