Lever Action Rifles in the Movies 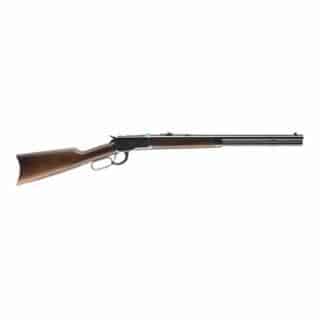 Guns have an undeniably strong presence in the movies, and it’s been like that since the early days of the cinema.
Classic lever-action guns, such as Winchester or Marlin rifles, have appeared in plenty of movies and TV series, maybe more than any other type of gun such as old bolt action single-shot firearms.

What Is A Lever Action Rifle?

As is it implied in the name, this type of rifle uses a lever to eject a spent round and chamber the next one.
After pulling the trigger, the shooter must take his finger out of the trigger guard, then move the lever in the loading gate forward and then back to where it was initially. After this, the gun will be ready to shoot again.
Lever action rifles are famous thanks to their role in America’s expansion to the West, where they were used for hunting as well as home- and self-defense.
This connection to the West often gives these rifles an air of nostalgia, and it’s definitely part of their overall charm.
Lever actions make very good hunting weapons and are highly accurate.
The Henry Repeating Rifle, introduced in the early 1860s, is a good example of a great lever-action rifle.
The Henry rifle then inspired the design for Oliver Winchester’s Winchester Repeating Arms Company rifle, one of the most famous rifles in history and the cinema. While Winchester has made other quality arms since like model 70 they just don’t quite compare to the nostalgic kick that one gets from the classics. The 1886 “YellowBoy” Winchester rifle is perhaps the most iconic of them all as it appears in countless films and T.V. shows. It is most recognizable for its unique gold-tinged metal and lever.

Winchester ‘73 starring Jimmy Stewart was a very successful film released in 1950 and was a fictional account of how some of the first Winchester rifles “won the West.” The Winchester model 1873 instantly became a classic firearm in the media of North America.

Audiences of the time were not as keen on historical accuracy in their media, so the Winchester model 1892 also snuck its way into Civil War action movies as well. The rifle would be produced three decades later but no one seemed to mind seeing them in the movies. Their iconic shape just looked right to moviegoers.

Winchester Rifles in the Movies

Jimmy Steward was not the first nor the last of a long line of Western movie stars to highlight the Winchester. John Wayne also helped to popularize the Winchester repeater in American cinema. The 1939 jewel “Stage Coach” directed by John Ford starred John Wayne as the titular hero. In the film, he used an 1892 carbine.
The Winchester Model 1894, one of the most popular guns of its day, has appeared in numerous movies since the early days of the cinema.
Some of the most notable westerns where the gun was used include:

Winchesters are so popular with movie directors that even non-western films often include this model Winchester:

and many, many more.

Another iconic lever-action used in many films is the Marlin Model 1895.
This lever-action gun has smooth, artistic lines, a 6-round capacity magazine, and chambered for the .45-70 Government cartridge. It measures 37 in. long, and weighs about 8 lbs.
While it does not have the same legendary reputation as the Winchester 1894 has, many producers and directors use it for its sleek look.

Using any list of modern browsers like firefox, chrome, safari, opera, or internet explorer, you should be able to easily shop for guns online from the comfort of your own home. When looking for antique firearms or movie replicas it can be difficult sometimes to find the firearm that you’re looking for in a traditional store.
When shopping online you can find those exclusive guns that you may have not been able to track down in stores. You can even review the unique specifications of the gun that you want online. Simply click on the icon and you will have access to all the information that you need. If you go to the browser’s download page you can save the specs for later. It’s easy to find modern firearm supplies online as well, such as a box magazine or tubular magazine for a more modern rifle.

Working replicas or modern designs of these film favorites are still available today.
You can find lever-action rifles for sale online in our web store.