Everyone has their own preferences and requirements for equipment related to their hobbies or sports; this certainly holds true for gun lovers as well. The following are some of our favorite semi-automatic rifles separated into several distinct categories: accuracy, power, reliability, affordability, home defense, and guns for beginners.

Every shooter is going to have different needs as far as accuracy is concerned. Part of the reason for this is due to the variance even in machine-made gun parts. It is impossible for each part to be 100% identical in each gun. The small variances, taken in the aggregate, can affect accuracy.

There are also human factors such as vision, experience, strength, and size which determine the weapon that can be used. Still, some guns simply perform better than others with respect to accuracy.

The Remington R-25, semi-automatic rifle touts not only impressive accuracy but all-around excellent performance with low recoil. The lightweight (just under 9 pounds) makes this a solid choice for hunting big game. It can easily be carried through the woods without creating fatigue, but it is also durable enough to stand up to the elements.

When pure power is your aim, you can’t do any better than a Barrett REC7 (which stands for a reliability-enhanced carbine, 2007). Barrett builds the REC7 with fewer moving pieces than its counterparts, making it lower maintenance as well as super reliable.

Typically, this gun can easily hit target 2,000 feet away. In fact, the reliability of the weapon mixed with its supreme power and relatively affordable nature makes it one of the major contenders to replace the M4 carbine that the United States military currently uses.

When looking for any semi-automatic rifle reliability should be an important consideration, but especially if the gun is getting a lot of use. There is no point in spending money on a gun that will only last a couple of years or will give you trouble with malfunctions. 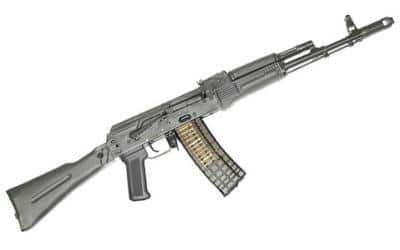 Arsenal, Inc. is known for creating some of the most reliable semi-automatics in the world: AK-47s. However, Arsenal has also created a similar SLR106 which has gained some positive feedback regarding several qualities, but most of all its reliability.

The Hi-Point Carbine 995TS isn’t overly well known as a “best” choice for anything. This clunky, heavy gun was created to work around the 1994 federal ban on assault weapons. Built with a pistol grip and blowback operated, it only holds up to 20 rounds at a time.

Still, this rifle is incredibly consistent and able to hit a target at long ranges, and at 250 yards easily hits the bullseye. It is also remarkably reliable, and not known to jam up no matter how many boxes of rounds you fire off. It is absolutely one of the least expensive on this list (or any other list for that matter).

Being inexpensive and reliable, the Hi-Point Carbine would be perfect for protecting your loved ones. Even those less familiar with firearms will be able to use it effectively in an emergency.

The AR-15 is another well-known rifle, especially in the United States. Law enforcement, when looking for a semi-auto rifle, often turn to the AR-15.

The AR stands for ArmaLite Rifle, although many people believe that it means “assault rifle.” For those just starting to learn about, and appreciate gunmanship, one first must realize that the gas-operated AR-15 is more than just an assault rifle.

Today, only one gun company has the official rights to the term “AR,” and that is Colt. MSR (or modern sporting rifle) is more often the technical term used. Most people still lovingly refer to them as AR, however. This is important to note when looking for a new gun, especially for the uninitiated.

We chose the ArmaLite M15 Light Tactical Carbine for its lightweight aluminum body, reliability, and cost.

A healthy respect for the power and possibility of damage is necessary when looking at any new gun. The M-15 can seem a bit intimidating at first glance, however, it is actually the perfect starter rifle. Not only is it lightweight but also easy to use with a sensitive trigger and low recoil. There are also many customizable options for modifications once the beginner is more comfortable.

If you are looking for semi-automatic rifles to buy online, then check out the extensive collection at IFA Tactical. We also have ammo and accessories, and resources available if you are still looking to do some research.