Home » Rifles » Pistol vs. Rifle vs. Shotgun: What’s the Difference?

Pistol vs. Rifle vs. Shotgun: What’s the Difference? 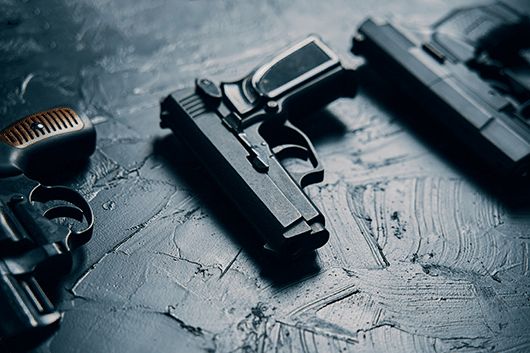 If you’re a beginner with firearms, you may not fully understand the differences between each type.

Learning the differences between pistols, rifles, and shotguns is one of the most critical steps to understand gun terminology better, allowing you to make informed decisions on which is right for you.

Before explaining what pistols are, it is essential to understand what a handgun is first.

A handgun refers to a small, handheld firearm designed for one-handed use. There are multiple types of handguns, with the two most common types being revolvers and pistols.

A typical handgun features a relatively short barrel, lacks a stock, and fires ammunition designed explicitly for them (commonly referred to as “pistol calibers”), and its primary advantage is portability. They are the most convenient type of firearm to carry because of their relatively low weight and small dimensions.

Handguns are also the only type of firearm that a person can carry concealed practically and efficiently. In contrast, even the shortest and lightest rifles and shotguns tend to be too long, too heavy, or too cumbersome for concealed carry.

The main disadvantages of handguns are their relative lack of power and the short effective range. Multiple studies regarding handgun effectiveness exist, and most come to the same conclusion: that there is no appreciable difference between the vast majority of them.

That does not mean handguns are ineffective for self-defense, but it does mean that relative power or factors like bullet size and dimensions don’t matter as much as accuracy and shot placement.

Handguns using revolving mechanisms have existed since the 16th century, but modern revolvers are a 19th-century invention introduced by legendary gunsmith Samuel Colt.

A revolver is a handgun featuring a revolving mechanism called a cylinder, composed of multiple chambers, one for each cartridge. Examples of common revolvers include the Smith & Wesson Model 10, the Colt Python, and the Ruger Redhawk.

The cylinder rotates, allowing the user to align a chamber with the barrel, fire the cartridge contained within, then repeat the process until all ammunition is expended.

Revolvers are sometimes called wheelguns, after the rotating cylinder, or six-shooters, due to the vast majority of revolver cylinders having a capacity of 6 rounds. However, some models may carry up to 10 rounds. They generally possess one of three trigger mechanisms: single-action only (SA), double-action/single-action (DA/SA), and double-action-only (DAO).

Historically, the term pistol referred to any handgun or any small firearm, and the word is still colloquially used today in that sense. Today, most people use the term to mean semi-automatic pistol rather than a revolver.

A semi-automatic or semi-auto, pistol is a handgun that uses the recoil energy produced after a shot is fired to extract the spent casing and automatically load the next round.

Typical semi-automatic pistols use magazines instead of cylinders to carry ammunition.

Magazines are box-shaped devices containing a spring and a follower, pushing the rounds upwards and allowing the gun’s mechanism to continue loading new ammo until the magazine runs dry.

The main advantage of semi-auto pistols is the capacity. Box magazines can contain a much higher number of cartridges than revolver cylinders can. Modern pistols feature detachable box magazines, allowing a shooter to replace an empty magazine with a full one quickly.

Typical pistol magazines can carry between 6 and 20 rounds, depending on the size and caliber. Extended magazines may hold an even higher number of rounds. The Glock 19, one of America’s most popular defensive handguns, is a 9x19mm pistol featuring a 15-round magazine. In contrast, a classic full-size 1911 pistol chambered in .45 ACP traditionally features a 7-round magazine. The category of long guns includes rifles and shotguns. The term long gun typically refers to a firearm with a relatively long barrel and a shoulder stock, requiring the use of both hands to use effectively.

The main differences between a rifle and a shotgun are the barrel and the ammunition they’re designed to shoot.

Rifles are long guns featuring a rifled barrel. Rifling is a series of curving grooves cut or machined into the barrel. When firing a rifle, the rifling causes the bullet to spin and stabilize in flight. The spin stabilization allows a bullet to be fired accurately and at extended distances compared to a handgun or a shotgun.

Most handguns are also rifled, but because they possess shorter barrels and fire comparatively weaker ammunition, they generally do not have the same effective range. The lack of shoulder stock also means the shooter cannot shoot it as accurately as a rifle.

The power of a rifle entirely depends on the caliber and the barrel length. Rifles run the full spectrum of firearm power, ranging from the lightest target rifles like .22 CB and .22 Long Rifle to the heaviest anti-materiel rifles like .50 BMG and 12.7x108mm.

A rifle’s effective range depends on its caliber, varying between 100 yards to over a mile, but the most common models are typically accurate between 300 and 800 yards. They are available with various actions and mechanisms; they may be bolt-action, pump-action, lever-action, semi-automatic, or even fully-automatic (machine guns).

A rifle’s magazine capacity may also vary greatly, ranging from single-shot to as high as 100 rounds.

Shotguns usually possess a smoothbore barrel, meaning that it doesn’t have any rifling. In a sense, a shotgun barrel is similar to that of a musket because the lack of a rifling means the projectiles fired typically have little to no spin. This lack of spin stabilization means that shotguns lack the rifle’s effective range and become ineffective at distances beyond 50 yards.

Shotgun ammunition typically uses the gauge notation instead of metric or inches, such as 12 gauge or 20 gauge, with just one exception: .410 bore.

Like rifles, shotguns exist in various actions and mechanisms. Pump-action shotguns are the most popular, followed by double-barrels and semi-automatics. However, shotguns may be loaded with various shells and projectile types, granting them unparalleled versatility and allowing the shotgunner to adapt to the situation simply by switching ammunition.

Once you understand the basics of each firearm type, you are ready to develop your knowledge further. It is advisable to learn as much as possible about the firearms you intend to own and shoot.

No matter your experience level, IFA Tactical is happy to assist you. Don’t hesitate to call our qualified staff at (586) 275-2176. We can help you find the firearms, ammunition, and equipment you need.