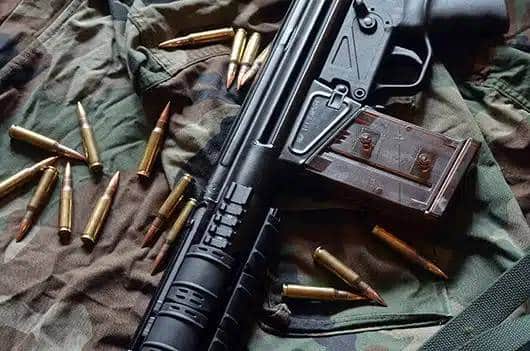 If you’re interested in hunting deer-sized game and larger, or long-range competitive shooting, a .308-caliber rifle can be a useful addition to your gun collection. Sufficiently accurate and powerful for a wide variety of applications, the .308 Winchester cartridges and the rifles that fire it are also readily available in the U.S. and abroad.

History of the .308 Cartridge

After World War II, the U.S. Army began a series of ammunition experiments. Using the .300 Savage cartridge as a starting point, Frankford Arsenal developed a series of experimental cartridges designated T65. NATO standardized the T65E5 as the 7.62×51mm NATO in 1954.

This new cartridge reproduced the service ballistics of the .30-06 M2 ball cartridge in a round with a shorter case that was more adaptable to semi-automatic actions. In 1952, Winchester introduced a variant of the T65 to the U.S. sporting market as the .308 Winchester.

You can find .308 rifles in practically every type of action, from single-shot breechloaders to bolt- and lever-action sporters. As the round was originally designed for use in self-loading actions, there are a wide variety of semi-automatic rifles available in this chambering, including those derived from well-known military designs.

The .308 Winchester is one of the most popular short-action centerfire rifle cartridges in North America for hunting deer, elk, black bear, and other medium- to big-game animals. It’s also used extensively in competitive target shooting.

In many ways, the .308 is a general-purpose cartridge. Common loads use bullets starting at 150 grains, but heavier bullets weighing from 165 to 180 grains are also available, which provide additional penetrating power for big-game hunting. If you substitute relatively lightweight bullets (110–125 grains), the .308 is also useful for hunting small game.

Depending on the ballistic coefficient of the load you’re using, the accuracy of your rifle, and your choice of optic, the .308 Winchester has an effective range on a point target of between 800 and 1,000 meters. For this reason, law enforcement snipers favor this round when loaded with match-grade, such as the 168-grain Sierra MatchKing.

Compared with rifles and carbines chambered in the .223 Remington/5.56mm cartridge, the primary advantages of the .308/7.62mm round are increased effective range, kinetic energy, and barrier penetration. The heavier bullet is also less susceptible to wind drift.

For example, take the 7.62mm M80 cartridge, loaded with a 147-grain lead-cored full metal jacket projectile and achieves a muzzle velocity of approx. 2,750 ft/s. Compared with the 5.56mm M193 cartridge (w/ a 55-grain bullet) adopted in the M16 rifle, the 7.62mm round delivers almost twice the kinetic energy and more than 2.5 times the bullet weight.

Compared with the .30-06 cartridge, the .308 uses a short case that allows the weapons firing it to have correspondingly shorter actions. As a short-action cartridge, the .308 Winchester is available in a wider variety of semi-automatic rifles fed from detachable box magazines.

The AR-10, designed by Eugene Stoner et al. at ArmaLite, is one of the earliest 7.62mm battle rifles and was the basis for the later AR-15/M16 series of weapons. Using a 7-lug rotating bolt and Stoner’s unique gas system (often likened to direct impingement), several companies offer AR-10-pattern rifles for sale. If you’re familiar with the AR-15, the AR-10 is a superb introduction to .308 weaponry.

The M1A is the commercial variant of the M14 service rifle, limited to semi-automatic-only operation. Fed from a 20-round magazine, the M1A uses a cut-off and expansion gas system and short-stroke piston. The two-lug rotating bolt and operating rod are similar to those of the M1 Garand and M1 carbine. The more traditional shooter who prefers wooden furniture will appreciate the design’s legacy.

The FN FAL, nicknamed “the right arm of the free world,” was the first battle rifle to fire the 7.62mm NATO cartridge. Adopted by more than 90 countries, the FAL is also available to private citizens in several variants. The FAL is fed from its own 20-round magazine pattern and uses a tilting breechblock and short-stroke gas piston.

The HK 91 (and subsequent variants, such as the PTR-91) is the commercial variant of the West German HK G3 battle rifle. It uses a roller-delayed blowback operating system and a stamp-pressed sheet-steel receiver.

The .308 Winchester commercial cartridge operates at a higher pressure than 7.62mm ball ammo; 62,000 psi vs. 60,200 psi. For this reason, some manufacturers advise gun owners not to fire .308 ammo in rifles with 7.62mm chambers; however, the reverse is generally considered safe. If you own a rifle chambered in .308 or 7.62mm and fed from a detachable box magazine, there are several standards or patterns on the market. These include AR-10, M14/M1A, HK (G3/HK 91), and FN (FAL). Each magazine type is widely available, ensuring you’ll be able to amass a reasonable collection. In contrast, rifles chambered in .30-06 are generally limited to a proprietary magazine designed for that weapon. When you can find magazines for a .30-06 rifle, they’re usually more expensive.

Bolt-action rifles chambered in the magnum calibers (.300 Win. Mag., 7mm Magnum) produce recoil that many shooters find excessive. The recoil of the 308 Win tends to be manageable in a typical bolt-action sporter or semi-auto rifle without the need for recoil-reducing accessories, such as a muzzle brake.

Cons of a .308 Rifle Compared to Other 30 Caliber Rounds

While the .308 Winchester’s shorter cartridge case allows for shorter actions and more compact magazines, it also reduces the powder capacity. As a result, the .30-06 cartridge, when loaded with the same weight bullet and fired in the same length barrel, has a muzzle velocity advantage of approximately 100–150 ft/s. The shorter case neck of the .308 is not as compatible with the heavier 200- and 220-grain bullets.

For specialized hunting applications where increased penetration is needed, this can be a detriment. The heavier bullets provide additional penetration when hunting big game.

Not ideal for long-range shooting

When loaded with the same 150-180 grain bullets and fired in similar rifles by equally competent shooters, there doesn’t appear to be a discernible difference in accuracy between the .308 and .30-06 cartridges.

However, cartridges that achieve flatter trajectories are preferable for long-distance shooting, especially as ranges increase beyond 300 yards—the .300 Win. Mag. and 7mm Remington Magnum, for example, are also good choices for hunting at longer distances. This is because the bullets can deliver more energy to the target.

If you plan to hunt on an international scale, you’ll need to consider local restrictions regarding the caliber of your rifle. In some countries, such as Mexico, the .308 Winchester cartridge is considered a military round. As a result, it’s prohibited for sporting purposes, requiring a substitute.

Understanding the cons of a .308 rifle requires a separate comparison regarding rifles chambered in the light calibers.

If you’re interested in buying or building a rifle or carbine for home defense, a weapon chambered in .308 is not generally considered an ideal choice. The heavy .30-caliber bullets are considerably more penetrative regarding common building materials than lighter alternatives, increasing the risk of causing injury to bystanders inside and outside your home.

In relatively rural environments, this may be less of a concern. However, in densely populated urban areas, this can be a serious liability. If you intend to keep a rifle for home defense, consider the .223 Remington cartridge using expanding or frangible bullets.

There are some notable exceptions to this rule, however. If you need a weapon and caliber for ranch or retreat defense, a rifle chambered in .308 Winchester can be preferable. This is a good choice where distances are long, and you may have to penetrate cover.

Rifles chambered in .308/7.62mm tend to be heavier and bulkier than comparable weapon types chambered in the light .223/5.56mm cartridge. As a result, they’re less maneuverable in confined spaces and harder to store and transport.

Since the ammunition is heavier, you’ll have fewer rounds available to you for the same weight. The 5.56mm M193 Ball and M855 NATO cartridges weigh 182 and 190 grains, respectively. The 7.62mm M80 NATO cartridge weighs 392 grains, which is about twice as much.

Commercial .308 loads using heavier bullets will weigh more. This was one of the original reasons for the adoption of the 5.56mm round because it allowed the infantryman to carry more ammunition.

The standard magazine capacity for a .308/7.62mm semi-automatic rifle is 20 rounds, whereas the standard capacity for .223/5.56mm rifles, such as the AR-15, is 30. Box magazines holding 30 rounds or more are available for some .308/7.62mm rifles, but they’re considerably bulkier. If you don’t mind the weight, you can also find 50-round drum magazines for weapons like the M1A.

We Offer the Best Rifles for Your Budget

At IFA Tactical, we sell a wide range of rifles chambered in .308 Winchester and 7.62mm NATO for hunting, competitive shooting, home defense, and law-enforcement applications. If you’re interested in finding the perfect rifle in this caliber for your needs, we can help. Give us a call at (586) 275-2176 today. Our staff is happy to discuss rifle and caliber combinations with you.