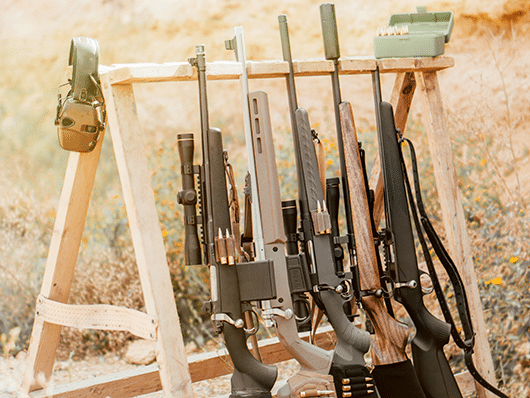 The .308 Winchester, introduced in 1952, is the commercial variant of the widely adopted 7.62×51mm NATO military round. The .308 is one of the most popular centerfire rifle cartridges for recreational and competitive shooting and hunting.

Frankford Arsenal developed the T65 experimental cartridge using the .300 Savage as a base over several years. This culminated in the 7.62×51mm cartridge, which NATO adopted two years after Winchester began marketing the .308 to civilians.

Advancements in propellants allowed the 7.62×51mm round to duplicate the service ballistics of the venerable .30-06 Springfield M2 ball cartridge but in a shorter case. The result was a shorter receiver and more compact battle rifles.

The .308 cartridge is sufficiently powerful for hunting most North American game, especially when loaded with heavy 180- and 200-grain bullets. For defensive applications, both commercial and military ammunition delivers increased barrier penetration and kinetic energy compared with lighter calibers.

The recoil is manageable for many shooters, both new and experienced alike. However, if the particular load proves too stout, a bolt rifle allows you to use lighter loads without sacrificing functional reliability. There are also other ways of reducing recoil, such as recoil-reducing pads and muzzle brakes.

The .308 round is in widespread use, making it readily available and reasonably priced. However, there may be some periodic shortages and price spikes.

Compared with the .30-06 and .270 Winchester, the .308 can be chambered in a relatively compact short-action receiver. Reducing the rifle’s overall length lets you transport and carry the weapon more comfortably, especially over uneven terrain.

The word tactical has several connotations. A tactical rifle is a weapon suitable for combat or defensive applications and provides you with the adaptability that you need to neutralize criminal assailants or enemy combatants at variable distances. This is exemplified in two types of rifles: the scout rifle and the precision rifle.

The scout rifle is intended for close- to medium-range engagements and often has a low-magnification variable optic and iron sights. For rapid sight acquisition, shooters prefer the ghost ring rear sight — a large rear aperture with a thin rim. The best examples of this rifle type are lightweight, relatively compact, comfortable to carry and fast to deploy.

The precision rifle is not simply a target rifle. It can also serve as a hunting rifle or sniper rifle. This requires significant accuracy and, often, the use of a powerful rifle scope for engaging targets at longer distances. The precision rifle may be heavier than the scout rifle and may chamber a more powerful cartridge.

Why a Bolt-Action Rifle?

Some gun enthusiasts may wonder why they should choose a bolt-action rifle instead of a semi-automatic rifle. There are numerous .308-caliber rifles based on the AR-10 pattern, including several inexpensive Palmetto State Armory options.

The primary advantage of the semi-automatic rifle is the continuity of fire. You don’t have to lose your stock weld to manually cycle the bolt. However, bolt-action rifles have certain advantages when compared with semi-automatic weapons. These include:

A bolt-action rifle has fewer moving parts than a semi-automatic rifle of the same caliber. There are no pistons, operating rods, or recoil buffers.

Fewer moving parts and increased simplicity result in superior functional reliability. A bolt-action repeating rifle can cycle weak or powerful loads because it does not rely on breech or gas pressure to reload itself.

With a bolt throw, or locking rotation, of 60–90°, two or three massive locking lugs, and reinforced bedding, a bolt-action rifle has a strong action. As a result, bolt rifles can be chambered in very powerful cartridges.

In a semi-automatic rifle, the extractor in the face of the bolt grips the cartridge case and withdraws it from the chamber. During firing, this can be a violent process.

Some semi-automatic .308-caliber rifles, such as the roller-delayed blowback HK 91, eject spent casings with such force that recovery can be difficult. If you want to preserve your brass for handloading, bolt-action rifles allow you to extract and eject the spent cartridge casing slowly and gently.

Disadvantages of a Bolt-Action Rifle

A high-quality bolt-action rifle has a few advantages compared with its semi-automatic counterparts. The primary downside is the rapidity of fire because you must manually manipulate the bolt handle between shots. However, you can reduce this time interval through training and diligent practice.

Continuity of fire used to be more of a disadvantage than it is today. The low-capacity, flush-fit detachable, or integral box magazine is typically limited to five cartridges. In older rifles, you could replenish the magazine by using a stripper clip. However, clip guides have become less common.

For a hunting rifle, a low round count may be adequate. For home, ranch, or farm defense, modern bolt rifles benefit from the use of detachable box magazines with a capacity of 20 rounds or more. 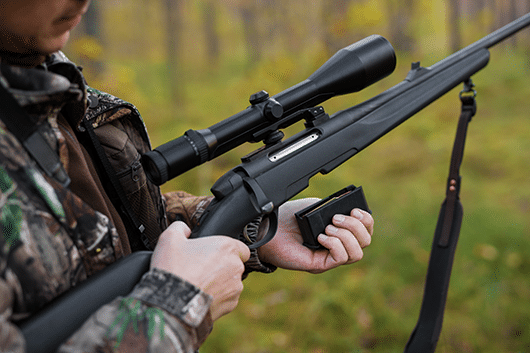 These are some of the most popular and available bolt-action rifles chambered in the .308 Winchester cartridge, from the entry-level to the advanced.

The Remington 700, introduced in 1962, is the default bolt-action sniper rifle for law enforcement (SWAT) and military personnel. The United States Marine Corps adopted the short-action Remington Model 700 as the M40 in 1966. In 1988, the U.S. Army adopted the long-action receiver variant as the M24 Sniper Weapon System (SWS). For long-range shooting, the Remington is one of the most popular choices.

The Remington 700 uses a three-piece bolt with dual locking lugs and a 90° throw. The ejector is the plunger type — a spring-loaded pin — and the bolt face is recessed, so it fully encloses the cartridge case head. Unlike the Winchester Model 70, the 700 is a push-feed design, using a spring-loaded extractor that snaps over the rim as the cartridge is chambered.

The 700 series is fed from either an integral magazine holding between three and six rounds, depending on caliber, or a 10-round detachable box.

Due to the loyal following and continued popularity of this rifle platform, an extensive spare parts and accessories market has emerged.

The Ruger American Predator is an affordable tactical rifle suitable for a variety of applications.

Sturm, Ruger & Co. has been in the firearms manufacturing business since Bill Ruger introduced the famous Standard .22-caliber pistol in 1949. In 1968, Ruger introduced the M77 bolt-action rifle, designed by L. James Sullivan, the man responsible for scaling down Stoner’s AR-10.

The American Predator boasts several features to help the rifle shooter achieve their aims. Among these is the Marksman Adjustable trigger, which you can set between 3 and 5 lb. weight range.

Ruger designed the synthetic stock to be lightweight and highly maneuverable, including grip serrations and contouring the fore-stock for increased comfort. This non-slip texturing is highly advantageous for wet or inclement weather.

Although the .308 cartridge doesn’t produce significant recoil, the American Predator has a soft rubber butt pad to dampen the blow to your shoulder. The one-piece bolt has three locking lugs, dual cocking cams, and 70° of locking rotation, which provides more clearance for a rifle scope than 90° throws.

Ruger’s Power Bedding system uses four bedding blocks to securely lock the action into the stock. The bedding screws pull the receiver down, wedging it securely.

Another benefit of this rifle is the cold-hammer-forged threaded barrel with heavy taper. The company describes the rifle’s accuracy as equivalent to 1 minute of angle (approx. 1” at 100 yards).

The 110 Scout is an affordably priced interpretation of Jeff Cooper’s Scout Rifle concept. Lightweight, the 110 Scout weighs 7.72 lbs. unloaded. Relatively compact, the 110 Scout features a 16.5” button-rifled barrel with an overall length of 38.5”. The barrel is also equipped with a muzzle brake to reduce the recoil impulse.

Where the Savage really shines, however, is the AccuFit system, which allows you to adjust the height of the comb and the length of pull. For length-of-pull adjustment, Savage includes four 1.25” spacers.

Soft surfaces on the pistol grip and fore-stock increase grip traction and comfort when handling the rifle for extended periods and under various weather conditions. Continuing with adjustability, the AccuTrigger allows you to reduce the trigger pull’s weight, minimizing disturbance of the rifle when aiming and firing.

Savage Arms also boasts the AccuStock system, which consists of a rigid aluminum chassis and a steel bedding block. The Savage 110 Scout is fed from a detachable 10-round AR-style magazine (Magpul PMAG), providing increased continuity of fire compared with weapons using 5-round integral magazines. Rather than having to reload the integral magazine one round at a time, you simply remove the empty magazine and replace it. In .405 Bushmaster, this capacity drops to five rounds.

Jeff Cooper conceived of the Scout Rifle as a lightweight, versatile, and powerful bolt-action rifle for a variety of applications, from self-defense and competitive target shooting to hunting. The Austrian firearms manufacturer Steyr Arms collaborated with Cooper over several years to realize this concept.

The resulting Steyr Scout is remarkably light at only 6.6 lb, which is excellent for carrying on long treks, during hunting expeditions, and on farms and ranches. The overall length is 38.6” with a 19” cold-hammer-forged barrel, making it relatively compact but still longer than many carbines.

For stabilizing when shooting, the Scout features an integral folding bipod. When folded, the bipod forms part of the fore-stock.

Per Cooper’s suggestions, Steyr incorporated a dual-position magazine system. This allows you to activate a cutoff, so you can cycle the bolt without feeding from the magazine. As a result, you can load and fire one round at a time, keeping the 5-round magazine in reserve for emergencies.

For those situations where five rounds aren’t enough, the Scout has a compartment in the buttstock for a spare magazine.

The Scout uses a three-position wheel-like safety located on the tang of the stock. A red dot denotes the fire setting. The first safety setting locks the firing mechanism but allows you to cycle the bolt. The second setting locks the bolt entirely.

Steyr chambers the rifle in several cartridges other than .308 Winchester, including the increasingly popular 6.5 Creedmoor.

Introduced in 1936, the Winchester Model 70 is the rifleman’s rifle. Based on the Mauser action, Winchester implemented several cost-saving production and design changes in post-1964 Winchester rifles that remain controversial. However, this classic design’s latest iterations reintroduced some of the features that made the M70 such a hit.

One of these is controlled-round feed. Rather than some modern bolt-action rifles that use a push-feed system, the M70’s extractor grips the cartridge case securely as soon as it leaves the magazine and doesn’t let go until it’s expelled from the rifle. This increases the amount of control the bolt has over the cartridge, increasing reliability. Short stroking the bolt is less of a concern with controlled-round feed actions.

The fixed blade-type ejector further allows you to determine how vigorously you want to eject the spent cartridge casing. Retract the bolt slowly, and you can eject the spent casing gently, making it perfect for handloaders who wish to preserve their brass.

The M70 is fed from an integral magazine holding between three and five rounds, depending on the caliber.

At IFA Tactical, we appreciate bolt-action rifles, especially those chambered in the .308 cartridge. Bolt-action rifles have proven themselves to be simple, reliable, and accurate.