What Do Semi-Automatic Rifles Mean for Hunting? 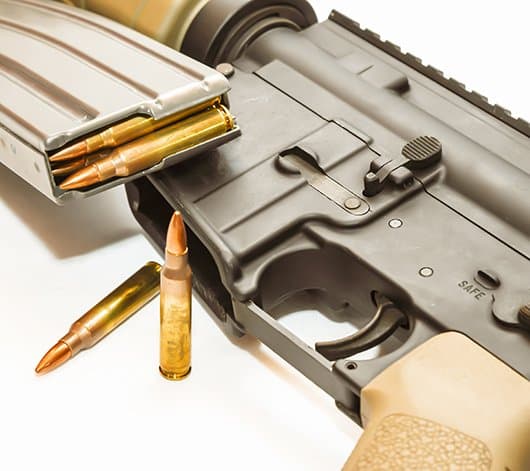 Semi-automatic rifles have been commercially available for more than a century, and hunters routinely use these and other firearms to shoot game animals for meat.

However, despite the popularity of semi-automatic rifles for hunting, competitive target shooting, and self-defense, there is confusion about the operation and lawful uses of these weapons.

If you want to assert your rights as a hunter, it’s important to understand how semi-automatic firearms operate and how they differ from fully automatic weapons. This also allows you to counter arguments regarding banning assault weapons or assault rifles.

A self-loading firearm uses the energy generated by the burning propellant in the cartridge to perform the reloading cycle. When a firearm reloads itself, it unlocks or opens the breech, extracts the spent cartridge from the chamber and ejects it from the weapon, recocks the hammer or striker, feeds a successive round into the chamber, and locks or closes the breech.

The earliest successful demonstration of this technology was the Maxim gun, introduced in 1884. However, the Maxim gun is a machine gun, and the self-loading operation is not limited to these types of weapons.

In a semi-automatic firearm, pulling the trigger once releases the cocked hammer or striker, which fires the cartridge in the chamber. The action uses the pressure exerted against the breech face or the gas pressure from the barrel to reload itself.

However, if you want to fire another round, you have to release the trigger, allow it to reset, and pull it again. One trigger pull equals one round. This is the principal difference between a semi-automatic firearm and a fully automatic firearm or machine gun.

Remember the first rule of firearms safety: “All guns are always loaded.” To unload a semi-automatic rifle, always remove the magazine first (if detachable) and check the chamber. On many sporting rifles — e.g., the Ruger 10/22, Ruger Mini-14/Ranch Rifle — you open the breech by retracting a charging handle on the right side of the weapon.

On the AR-15 platform, unless modified, the charging handle is located at the rear of the upper receiver, above the buffer tube, in the center. Inspect the chamber visually and confirm its empty status by inserting a finger.

Don’t retract the handle before removing the magazine, or you may inadvertently chamber another round.

Why a Semi-Automatic Rifle for Hunting?

As a hunting weapon, a semi-automatic rifle has several advantages compared with bolt-action rifles and other manually operated repeaters.

Since you don’t need to manipulate the bolt between shots manually, you can fire quicker. If you’re shooting varmints, such as rabbits or coyotes, the ability to fire fast follow-up shots is beneficial.

In some bolt-action rifles, it’s necessary to lift your cheek off the comb — the top of the stock — as you cycle the bolt. This can cause you to lose your sight picture. As a result, a semi-automatic rifle is more forgiving of missed shots than manually operated weapons.

A manual repeater may generate more perceived recoil than a semi-automatic firearm for several reasons.

In gas-operated firearms, powder gases apply pressure against both the operating rod or piston and the front of the gas cylinder, which may dampen the rearward recoil.

The bolt or bolt carrier group recoils separately, drawing out the process rather than the weapon recoiling as a single unit.

The recoiling action compresses a return spring and may also strike a buffer, which reduces the rearward velocity of these parts.

Many bolt-action rifles are fed from non-removable box magazines holding between four and six cartridges, depending on caliber, whereas semi-automatic rifles are typically fed from detachable magazines.

A detachable box magazine increases the continuity of fire. You can’t predict how many rounds you will need to repel or incapacitate a threat; therefore, a higher capacity can even the odds.

When hunting, you’ll need to observe magazine capacity restrictions, which vary from one jurisdiction to another. For example, in Oregon, it’s illegal to hunt game mammals, other than the western gray squirrel, with semi-automatic rifles whose magazines hold more than five rounds of ammunition.

Politicians and their supporters often refer to magazines holding more than 7, 10, or 15 rounds as high capacity when drafting gun-control legislation. In reality, the standard magazine capacity is 15 rounds for a Beretta 92FS/M9, 17 rounds for a Glock 17, 20, or 30 rounds for an AR-15-platform rifle.

The standard capacity of a magazine depends on the weapon. For example, a 10-round magazine for an AR-15 would be a low capacity for that weapon, as it’s uncommon.

The AR-15 remains one of the most popular centerfire rifle designs among gun owners for competitive target shooting, hunting, and home defense.

Modular and highly customizable, the AR-15 gives the hunter many options when it comes to parts and accessories. Few other designs allow you to personalize your weapon to the same degree.

Lightweight and ergonomic, the rifle platform is handy and comfortable to carry for prolonged periods. Eugene Stoner’s design is rugged, reliable, and battle-proven.

Common alternatives to the .223 are the .300 AAC Blackout, 6.5mm Grendel, and 6.8mm SPC. These rounds are effective against a variety of game animals, including deer. If you need heavier loads for black bears, consider the .458 SOCOM or .50 Beowulf. In addition, AR-10-platform weapons, chambered in .308 Winchester/7.62mm NATO. The term “assault rifle” has a technical definition. According to the Defense Intelligence Agency, “Assault rifles are short, compact, selective-fire weapons that fire a cartridge intermediate in power between submachinegun and rifle cartridges.” (Small Arms Identification and Operation Guide—Eurasian Communist Countries.)

“Selective-fire weapons” are capable of fully automatic or burst fire, in addition to semi-automatic. You can alternate between these firing modes via a selector lever. As a result, an assault rifle is a fully automatic rifle regulated as a machine gun in the United States.

However, there is no universally agreed-upon definition for the term “assault weapon.” An “assault weapon” is typically a semi-automatic-only centerfire rifle fed from a detachable magazine that also has at least one specified feature, such as a pistol grip or flash suppressor. “Assault weapons” typically resemble selective-fire military rifles, contributing to the non-sporting perception of these weapons.

At IFA Tactical, we sell a variety of semi-automatic rimfire and centerfire rifles suitable for hunting, competing, and self-defense. We know from experience that semi-automatic rifles, including the AR-15 platform, are superb hunting weapons. Give us a call at (586) 275-2176, and we’ll help you find the rifle you need to bag a buck this hunting season.

Finding The Best Hunting Rifle For Your Needs

2019 Changes To Semi-Automatic Hunting Rifle Laws Across The U.S.