Home » Rifles » Why the .22 Long Rifle May Be the Most Efficient Round

Why the .22 Long Rifle May Be the Most Efficient Round 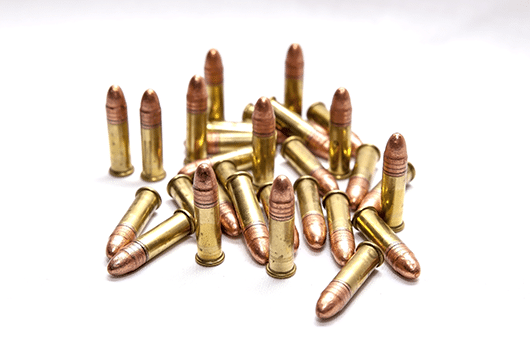 The .22 Long Rifle is a rimfire cartridge, available in semi-automatic pistols, revolvers, and single-shot and repeating rifles of every description. In use for more than 130 years, the .22 LR is the most popular cartridge for a number of reasons.

The Most Efficient Round

The .22 LR may be the most efficient round available due to its versatility and availability. Introduced by the Stevens Arms Co. in 1887, the round has several advantages that contribute to its overall utility for hunting, recreational and competitive target shooting, and even self-defense.

The .22 Long Rifle is one of the world’s most popular cartridges for practical and sporting purposes; it’s also widely available. Ammunition shortages notwithstanding, you should be able to find .22 LR ammo in every gun store and sporting goods store that sells firearms.

While ammo prices have risen in response to the pandemic, the George Floyd protests, and the aftermath of the 2020 U.S. presidential election, .22-caliber rimfire ammunition is generally less expensive than centerfire ammunition. As a result, it’s ideal for inexpensive range practice to maintain proficiency with firearms. Rimfire weapons also tend to be cheaper.

There are numerous types of .22-caliber firearms on the market. In handguns, you can find everything from highly compact, lightweight pocket pistols to heavy, long-barreled target pistols and revolvers — depending on your intended use.

In rifles, semi-automatic firearms, such as the Ruger 10/22, are popular, reliable, accurate, and offer increased rapidity and continuity of fire. However, you can also find single-shot, bolt-, pump-, and lever-action rifles chambered in .22 Long Rifle if you prefer how these designs operate.

When purchasing .22 ammo, it’s common to buy it in bricks of several hundred rounds, which you can easily fit into a range bag or backpack.

Aside from the low cost, .22 loads produce minimal recoil and noise, allowing the person to learn the fundamentals of marksmanship. You’ll still need to wear hearing and eye protection, but the report is inoffensive. The round also generates less noise pollution, which can be useful when firing on private property.

If you’re new to firearms or want to introduce a beginner to shooting, handguns, and rifles chambered in .22 Long Rifle are highly recommended. It’s also common for youngsters to learn shooting with a .22 for these reasons.

Several firearms manufacturers, such as Glock and Smith & Wesson, offer .22-caliber variants of centerfire handguns and rifles for familiarization firing. If you want to maintain proficiency with a duty handgun or AR-15 but don’t want to deal with the increased cost, muzzle blast, and recoil, a .22 is a good alternative for range practice.

For hunting small game and varmints, such as rabbits and squirrels, .22-caliber rifles are the ideal weapon. Using bullets weighing between 32 and 40 grains, .22 LR ammunition won’t cause excessive tissue damage, preserving more meat for the table.

If you were to use a centerfire rifle on many of these animals, you would risk turning them into pink vapor. Aside from hunting, .22 rifles are also useful for disposing of pests that threaten livestock or crops.

The .22 cartridge is common in takedown rifles, such as the AR-7 and Ruger 10/22 Takedown Model, and kit guns for use by backpackers. Since it’s lightweight, it can be broken down for ease of transport and is designed for rugged conditions.

.22 rifles and pistols are the default choices for informal recreational target shooting, including plinking. The ammo is less penetrative than centerfire cartridges, so the bullets don’t travel as far, and the damage caused is comparatively minor.

Can be used for self-defense

While many gun owners do not think of .22-caliber firearms as viable self-defense weapons, they can fulfill this role if necessary. For gun owners who do not have access to more powerful weapons or can’t handle them, a .22 rifle is a good option.

A semi-automatic .22 rifle, fed from a 10- or 25-round magazine and loaded with high- or hyper-velocity ammunition is effective against an assailant. It also has the advantage of not blinding or deafening the shooter when fired in an indoor environment.

For trading under survival conditions

Under survival conditions, prominent gun writers, such as Col. Jeff Cooper, theorized that .22 Long Rifle ammunition could be used as ballistic wampum — i.e., a replacement for money in the aftermath of a socioeconomic collapse. Whether you consider this a far-fetched suggestion depends on the kinds of short- and long-term survival scenarios you envision occurring in the foreseeable future. .22 Long Rifle ammunition is generally divided into three velocity tiers: Standard, high, and hyper. Lead-round nose bullets, either exposed or copper plated, are typical for target shooting and plinking, but you can also find copper hollow points and frangible ammunition for hunting.

These bullets are designed to expand on impact with soft tissue, causing additional trauma. Frangible bullets are also less likely to ricochet or cause dangerous fragmentation when shooting steel plates at relatively close distances.

Standard-velocity .22 LR ammunition can typically achieve muzzle velocities between 1,050 and 1,100 ft/s in a rifle-length barrel with a 40-grain bullet. A common example is CCI Standard. This is adequate for many sporting purposes, including plinking, but there are scenarios where increased muzzle velocity is needed.

In addition to standard-velocity ammo, you can also purchase high-velocity loads that add 100–125 ft/s and hyper-velocity loads designed to maximize the potential of the ammunition when fired from a rifle.

A common example is the CCI Stinger, which increases the muzzle velocity to between 1,400 and 1,500 ft/s with 32–36-grain bullets for inflicting highly disruptive wounds.

Depending on the ammunition, the rifle, and your proficiency with firearms, you should be able to cleanly kill varmints and other small game animals at distances of 150 meters or more.

Many .22 rifles have highly capable iron sights, such as a front blade or post and rear folding leaf, but optics, including rifle scopes, are also effective. Modern rifles feature Picatinny and Weaver rails to accommodate these alternatives.

Many standard-velocity .22 LR loads are subsonic when fired from handguns and rifles, but the sound barrier is also dependent on environmental phenomena (e.g., ambient temperature). For use in firearms with sound suppressors, ammunition that is consistently subsonic is ideal for reducing the report and creating a whisper-quiet weapon.

Find the Best .22 Ammo and Weapon for Your Needs

At IFA Tactical, we sell .22-caliber rifles and handguns for hunting and other sporting purposes in various configurations and action types. If you’re interested in finding a .22 LR for shooting targets, competing, or hunting, call us at (589) 275-2176.