Home » Rifles » How to Waterproof a Handgun or Rifle

How to Waterproof a Handgun or Rifle 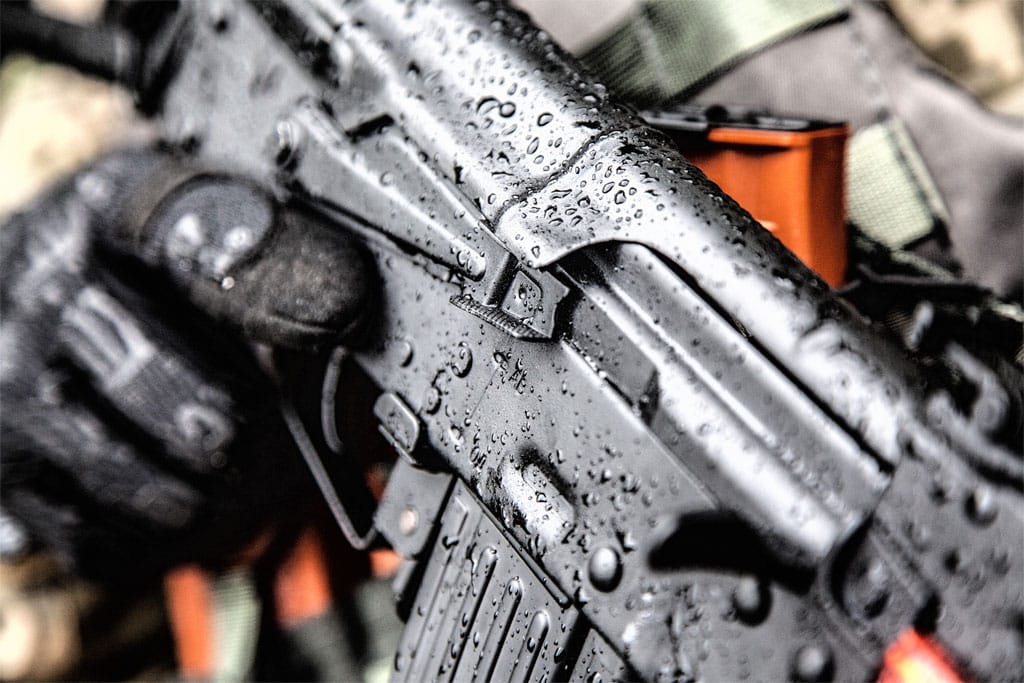 If there is one thing that gunowners hate worse than politicians attempting to take away their 2nd Amendment rights is rust. Even your best semi-automatic rifle or handgun is susceptible to water damage.

There are ways to waterproof your rifle or handgun, however, and keep rust and water damage at bay.

Rust is a simple chemical reaction between iron and oxygen. Water combines with carbon dioxide in the air, creating a weak acid, which, in turn, releases oxygen.

Salt speeds up this reaction, which is why weapons and anything metal corrode quicker in salt air or by the sea.

Keeping ammunition dry took a lot more effort back in the black-powder and ball and cap days. Once black powder gets wet, even when it dries out, the powder won’t ignite.

The potassium nitrate or saltpeter in black powder dissolves very easily in water. Once it dissolves and later dries out, the re-crystallize potassium nitrate crystals must be pulverized and re-milled and mixed in again with the other ingredients for the powder to work.

In the 1800s, gunfighters like Wild Bill Hickok used to fire all the rounds in his gun and replace them each morning. The moisture in the air or dew could contaminate the rounds and fail him at a critical time.

Today, modern cartridges are fairly water resistant. Most ammunition, if it gets slightly damp, will function fine. Military spec ammunition often is sealed or lacquered to keep moisture out.

Cleaning and oiling your gun is the most critical step to take that keeps rust from forming. The reason you want to leave a fine sheen of solvent on all the metal parts when storing your gun is so that moisture in the air doesn’t get the chance to react with the metal over time. Most hunters don’t have the luxury of hunting in dry conditions. Rain or slogging through streams or rivers provide plenty of opportunities for water to get into the metal parts.

The muzzle is one of the most vulnerable parts to water damage. If you are out hunting, one simple trick is to cover the muzzle with tape. You can take your shot and blast right through the tape without harming the trajectory of the round.

It is also a good idea to have an oil-soaked rag with you when out in the woods for extended periods. If it rains, after drying off the barrel and trigger housing, wipe it down with the rag.

Even in dry conditions, your sweat can quickly rust a weapon. As many federal agents can attest to, if you wear a gun for eight or ten hours a day in a desert or hot climate, you can soak right through your shirt or pants and contaminate your handgun.

Sweat is extremely caustic to metal, and you may even see rust beginning to form after only a few hours.

This is an old hunter’s trick to keep the nooks and crannies of the exposed metal of your gun rust-free. The screws and sites on a gun easily collect moisture. Rubbing Chapstick on these spots will keep the water from collecting and rusting these parts.

Many experienced shooters rely on polyurethane and mineral spirits to waterproof a wooden stock. You want something that soaks into the wood rather than just coating the surface.

Obviously, one of the best ways to waterproof your scope is to buy one with a cover. A flip up cover is best when hunting so you can quickly flip it up when acquiring your target.

Many optics manufacturers make waterproof, and fog proof, optical lens, so you need not worry about waterproofing your scope.

However, water drops may still get in the way of obtaining a good sight picture, so covering the scope while traipsing through the woods is a good idea, in addition to protection for scratches.

Additional About Handguns or Rifle blogs

Pistol Vs. Rifle Vs. Shotgun: What’s The Difference?

What Are The Best Handguns For Women?