Home » Rifles » Revolver » Revolver vs. Semi-Automatic – What Are the Differences?

Revolver vs. Semi-Automatic – What Are the Differences? 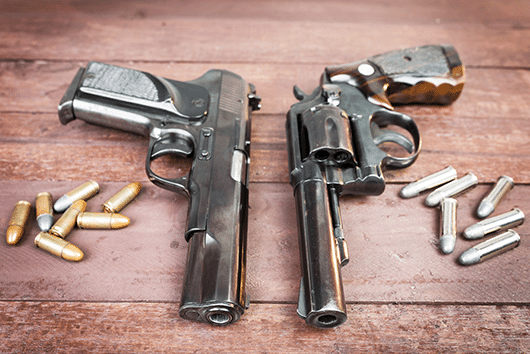 Handguns come in various configurations, from single-shot pistols to derringers, but the two most common types are the revolver and the semi-automatic pistol. Revolving firearms have existed in one form or another since at least the 17th century. The modern revolver (double- and single action, swing-out cylinder) and the semi-automatic pistol are products of the late 19th.

Differences Between Revolvers and Semi-Automatic Pistols

While gun owners own and carry semi-automatic pistols and revolvers for many reasons, there are several critical functional differences.

Semi-automatic pistols are magazine-fed handguns that use the fired cartridge’s energy to extract and eject the spent cartridge, recock the hammer, and feed a fresh cartridge into the chamber.

Semi-auto pistols with integral or detachable magazines generally have higher capacities than revolvers and are simpler to reload, especially under stress.

When the round is fired, the burning propellant’s high-pressure gases exert force through the case head against the breech face (the face of the bolt or slide), which is called bolt thrust or breech pressure. In a semi-automatic pistol operated by either recoil or blowback, this force is used to overcome the slide’s inertia alone or slide and barrel (recoil). A revolver is a handgun with a single barrel and a revolving cylinder containing multiple firing chambers, typically between 5 and 8, that align with the barrel to fire. The pressure you apply to the trigger or the action of cocking the hammer causes the cylinder to rotate or index, aligning the successive chamber with the barrel and readying the weapon for firing.

In most modern revolvers, you unload the cylinder by unlocking it from the frame using a latch on the side, swinging it out to the left, and depressing an ejector rod attached to an extractor star.

Revolver actions can be described as the following:

There are several ways to differentiate semi-automatic pistols other than make, model, and caliber. One is by action type, which includes:

Another is by the principle of operation. Most pistols that are chambered in service cartridges — e.g., 9mm Luger, .45 ACP — are locked-breech and recoil-operated to more effectively contain pressure.

A further distinction can be drawn regarding the type of magazine:

Advantages and Disadvantages of Both

When selecting a self-defense handgun, you must be aware of the practical differences between handgun types.

Whether you choose to carry a revolver or a semi-automatic pistol, you should understand the differences between them. Revolvers are more reliable with certain types of ammunition and are simpler to operate. However, semi-automatic pistols offer increased magazine capacity and are easier to reload.

At IFA Tactical, we’re passionate about firearms. Give us a call at (586) 275-2176 — we can help you determine which type of handgun would suit you best.