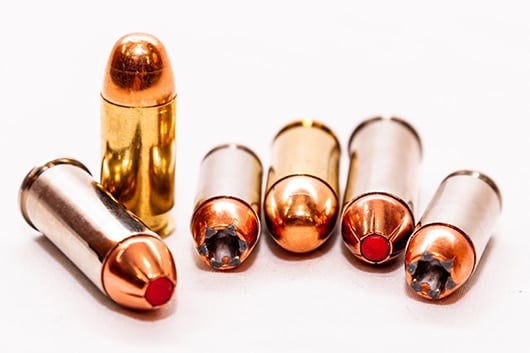 More than two-thirds of American gun owners cite personal protection as a primary reason for owning a firearm. However, the firearm is simply the launching platform — it’s the bullet, shot charge, or slug that stops the threat. When searching for ammunition suitable for self-defense, you should be aware of several selection criteria.

A highly controversial topic, stopping power, refers to the ability of ammunition to incapacitate or stop a threat, whether that’s a determined human aggressor or a grizzly bear charge.

This is sometimes conflated with knockdown power, although the connotation is different. The two most critical criteria regarding terminal performance are expansion and penetration.

As firearms that are relatively lightweight, compact, and portable, handguns are suitable for open or concealed carry. The handgun, consequently, is a reactive weapon that you can deploy in response to a deadly threat. Convenience is its primary advantage in comparison with long guns.

Several factors affect the terminal performance of ammunition. These include the diameter or caliber, construction, composition, weight, shape, and impact velocity of the bullet.

Non-deforming ammunition, such as full metal jacket, is best reserved for target practice in handguns. These bullets are highly penetrative but don’t expand in soft tissue. The standard for defensive ammunition in handguns is the JHP or jacketed hollow point. 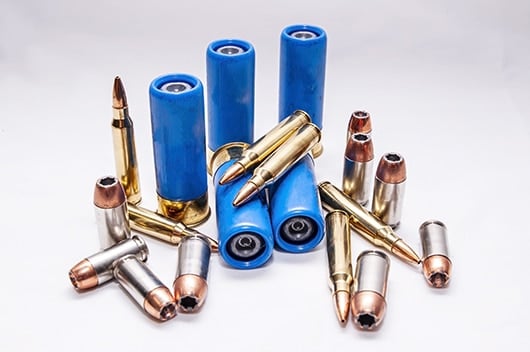 The first consideration regarding self-defense ammunition should be functional reliability. The ammunition you select for your defense gun — concealed-carry handgun, defensive shotgun, or tactical carbine — should cycle with 100% reliability.

If you’ve purchased a new semi-automatic handgun for concealed carry or home defense, you should fire at least 100–200 rounds through it to “break it in.”

Several prominent brands use a type of bonded core to reduce the chance of the jacket and core separating.

Nickel-plated brass is corrosion resistant and reflective, allowing you to more easily verify whether the chamber is loaded during routine press checks.

When selecting ammunition for your personal defense weapon, its terminal ballistic performance is critical to success. The elements of projectile wounding are the following:

Penetration is the tissue or media that the bullet passes through from impact to rest or exit. As a result of the 1986 Miami FBI shootout, the Bureau established minimum penetration standards for small-arms ammunition.

A bullet must penetrate to a depth of at least 12”, as tested using 10% calibrated ordnance gelatin. 15” penetration is considered optimal, and 18” is considered the maximum. The 12” minimum is designed to ensure that the bullet achieves sufficient penetration to reach and disrupt vital organs and major blood vessels from several angles of obliquity.

Penetration is essential for inflicting a reliably incapacitating wound. However, excessive penetration can also increase the risk of collateral damage. Ideally, your bullets should remain inside your intended target.

Temporary cavitation occurs when the bullet transfers kinetic energy to the surrounding tissues, causing them to be radially outward from the wound track. The damage that tissues incur from being stretched depends on their elasticity limits.

Inelastic and fluid-filled organs, such as the liver and spleen, are highly susceptible to this mechanism. Muscle, bowel, and lung tissue, and skin, are more resistant. Several factors affect temporary wound cavitation.

If the bullet expands, increasing its frontal surface area or yaws, which has the same effect, the bullet transfer kinetic energy rate will increase. This, in turn, increases the volume of the temporary cavity.

Jacketed hollow points often have an “expansion threshold.” This is the minimum velocity that it must achieve to expand reliably.

In short barrels, such as the 1⅞” barrel of a Smith & Wesson Model 442 snub-nosed revolver, the muzzle velocity may insufficiently meet the expansion threshold of standard-pressure and +P expanding bullets. As a result, the expansion will be unreliable in soft tissue, limiting the bullet’s terminal performance.

One solution is to use full wadcutter (WC) bullets — the flat nose and sharp shoulder are more apt to crush tissue than round-nosed bullets.

The following are popular brands of defense ammo that you are likely to see advertised for handguns.

Federal introduced the HST line of JHP bullets in 2002 for law-enforcement use. The HST brand is designed to strike a balance, achieving reliable expansion without compromising penetration. Although initially designed for, and marketed to, law enforcement, Federal released HST ammo to the civilian market in 2015.

Critical Defense is Hornady’s brand of defensive loads for handguns and rifles. Featuring the company’s Flex Tip insert, these bullets are designed to undergo reliable expansion regardless of the type of clothing they strike. Some heavy fabrics, such as denim, can plug the nose cavity of a JHP bullet, causing it to perform identically to a full metal jacket.

Introduced in 1988, Federal Premium developed the Hydra-Shok brand of ammunition to meet the requirements of the FBI regarding terminal wounding performance. The Hydra-Shok bullet, named after the “hydrostatic shock” phenomenon, consists of a jacketed hollow-point bullet with a center post and non-bonded core.

Speer Gold Dot is one of the most popular and reliable brands of defensive handgun ammunition. Speer’s Uni-Core electrochemical bonding process minimizes the risk of core–jacket separation, preserving bullet integrity.

At IFA Tactical, we understand the importance of selecting the correct ammunition for your self-defense firearm. You’re relying on this gun to save your life, so you need to know that the bullets you’re firing will perform at their peak. If you’d like to discuss self-defense ammunition, give us a call at (586) 275-2176.