Home » Rifles » Revolver » Why Your Next Revolver Should Be a 9mm

Why Your Next Revolver Should Be a 9mm 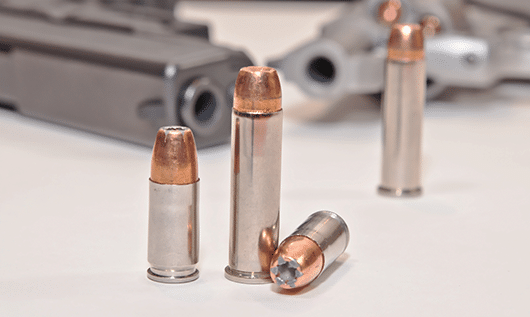 If you’re contemplating buying a revolver for home defense or as your carry gun, you may consider a wheelgun chambered in 9mm. Although not a traditional revolver cartridge, the 9mm has several advantages compared to the .38 Special and .357 Magnum that are worth looking into.

For concealed carry, gun owners choose revolvers for a variety of reasons. One is functional reliability. Modern semi-automatic pistols, designed for law enforcement and military service, are highly reliable. However, the self-loading action of a semi-automatic pistol is still dependent on sufficient breech pressure to perform the cycle of operation.

A revolver is not limited in this way. Bullet weight, shape, powder charge, and cartridge case material will not affect whether a subsequent shot is possible.

Furthermore, if you experience a misfire, for example, the firing pin strikes but fails to detonate the primer, in a semi-automatic pistol, standard practice is to perform the tap, rack, bang drill. That is, tap the magazine to ensure it is seated, rack the slide to eject the unfired cartridge, and press the trigger to fire.

In a double-action revolver, you can simply press the trigger a second time. If the round is defective, the cylinder will index, align the successive chamber with the barrel, and fire.

Another reason gun owners choose revolvers is simplicity. In a DA/SA or DAO revolver, the external controls are minimal, just the cylinder latch and ejector rod in concealed-hammer or hammerless models. All you have to do to fire is press the trigger.

Although a rare occurrence, if you find that you must press the revolver’s muzzle against an assailant to perform a contact shot, the reciprocating barrel of a recoil-operated pistol can deactivate the firearm. There is no such risk with the fixed barrel of a revolver.

The most obvious downside to a revolver is capacity. Semi-automatic 9mm pistols typically have magazine capacities of 15, 16, or 17 rounds. SIG Sauer, FN, and Glock also supply optional 21-, 24-, and 33-round magazines for their handguns. Revolvers, however, are typically limited to between five and eight rounds when chambered in centerfire cartridges.

The second downside is reloading. You can indeed learn to reload a revolver using speedloaders or moon clips rapidly, but this isn’t as seamless as inserting a fresh magazine. If you’re using efficient bullet shapes — i.e., JHP, LSWC, or WC — the bullet noses are more liable to catch on the chamber edges.

The third is specific to ammunition that is not typically crimped. If the cartridge case is not crimped against the bullet shank, the bullet can jump under recoil. In a revolver action, this can prevent the cylinder from rotating, rendering your weapon inoperable.

The 9×19mm Parabellum or 9mm Luger is a centerfire semi-automatic pistol and submachine-gun cartridge. Compared with traditional revolver cartridges, such as .38 Special and .357 Magnum, the 9mm may sound like an unusual choice.

However, 9mm Luger is arguably the most popular centerfire pistol cartridge in the world and benefits from being less expensive than either rival as a result.

If you own 9mm semi-automatic pistols or pistol-caliber carbines, there’s the additional advantage of increased ammunition commonality among your firearms.

As the 9mm cartridge is rimless, there is no surface for the extractor star to impinge against for you to unload the cylinder using the ejector rod. That’s why it’s essential to use half- or full-moon clips. The moon clip acts as a substitute rim for rimless cartridges, resting in the extractor groove.

Several companies that manufacture 9mm revolvers, such as Ruger and Smith & Wesson, supply moon clips with their guns, but you should consider buying extras. Moon clips are easily lost and relatively fragile. If a moon clip becomes bent, you can no longer use it.

There are exceptions, however. The classic Smith & Wesson Model 547, for example, uses an extractor assembly consisting of multiple tips that enter the extracting grooves of 9mm cartridges, allowing them to be extracted from the chambers without the use of clips. While the 9mm cartridge compares favorably with the .38 Special, the .357 Magnum is considerably more powerful, especially when fired from a full-size service revolver with a 4–6” barrel.

However, in a snub-nosed revolver, the .357 Magnum cartridge generates more blast, flash, and recoil. The .357 Magnum is still more powerful when fired in this compact package; however, whether the increase in power is worth the extra noise and kick is for you to decide.

The reason to select a 9mm snub-nosed revolver over a comparable model in .45 ACP is simple. In full-size revolvers and semi-automatic pistols, the .45 ACP is reasonably controllable for many shooters.

However, when you reduce the weight and gripping surface of the firearm, the .45’s recoil becomes more stout. In a gun that you’ve set aside for range shooting, this is a non-issue. For concealed carry, however, recoil makes a difference.

But what about stopping power? Before the advent of reliable jacketed hollow-point ammunition, the common argument against 9mm, particularly from big-bore aficionados, was that, while a 9mm JHP might expand, a .45-caliber FMJ won’t shrink.

All handgun cartridges are a compromise, but with modern, high-quality JHP ammunition, the 9mm Luger is perfectly adequate for self-defense.

There are several examples of revolvers chambered in 9mm Luger on the market. These include the following:

The Ruger LCR is a snub-nosed, double-action-only (DAO) revolver with a 5-round cylinder and a 1⅞” barrel. At only 17.2 oz. unloaded, 4.5” in height, and 6.5” in overall length, the LCR lives up to its name — Lightweight Compact Revolver. The LCR is ideal as a concealed-carry weapon. Ruger’s SP101 also became available in 9mm after almost 30 years of being on the market.

On the heavier end of the spectrum is the Model 986, a double-action/single-action (DA/SA) revolver with a 2½” barrel weighing in at 31.4 oz. That extra weight will reduce recoil further, especially when firing +P loads. The Model 986 has a 7-round titanium cylinder housed in a stainless-steel frame. A variant with a 5” barrel is also available to comply with restrictions specific to California and Massachusetts.

The Pitbull is a DA/SA revolver with a 2⅕” barrel that uses a unique extraction system for rimless cartridges, eliminating the need for moon clips. The Pitbull is chambered in 9mm Luger, .40 S&W, and .45 ACP in either a black-nitrided or stainless-steel finish. In a 9mm, the Pitbull weighs 22 oz. and has a 5-round cylinder.

Rock Island Armory, best known as the manufacturer of inexpensive M1911-pattern handguns, also offers a DA/SA revolver chambered in 9mm. Unlike the other entries on this list, the AL9.0 features a 4” barrel and more closely resembles a service revolver than a concealed-carry weapon. At 24 oz. unloaded (27.5 oz. loaded), the AL9.0 strikes a happy medium.

At IFA Tactical, we appreciate the versatility of the 9mm cartridge, and that extends to wheelguns. If you’d like to discuss revolvers chambered in pistol cartridges, and take a look at our inventory, give us a call at (586) 275-2176.